Lindsay Lohan was spotted drinking and smoking amidst rumors that she is pregnant.

On Thursday, the 30-year-old actress was seen drinking from a beer bottle and smoking on a yacht with friends following the recent relationship drama involving her fiance Egor Tarabsov moving out of her home, according to  People magazine. (RELATED: Lindsay Lohan Is Reportedly Pregnant) 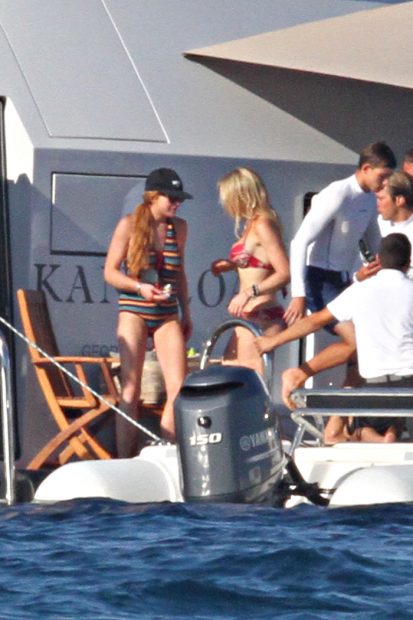 The actress was spotted wearing a stripped one-piece swimsuit with her friend Hofit Golan in Sardina. (RELATED: Lindsay Lohan Post Message Questioning Her Relationship With Her Fiance)

Lohan also has been rumored to be pregnant and those rumors were recently confirmed by comments made by her father Michael Lohan who told Page Six  that the actress was pregnant.

“She texted it to me and told me,” Lohan said. “I don’t know [how far along she is]. She tells me she is and I have no reason not to believe her.”

“I was a little bit taken aback, but it was to be expected,” he added. “She’s 30 years old. She wants to have babies. She loves kids.”

On Wednesday, Lohan shared a long message on her Instagram account bringing into question whether her relationship with her fiance could be fixed.

“My intentions were not meant to send mixed messages,” Lohan said. “Maybe things can be fixed. Maybe not. I hope they can. ”