Montel Williams, the perpetual D-lister who keeps trying to make his way into the upper echelons of American politics, got pulled aside in the Frankfurt airport Friday morning for having prescription marijuana powder in his suitcase.

Earlier this afternoon, the AP reported that Montel’s spokesman and political director — the infamous Jonathan Franks — said Montel was detained in customs for “about an hour.” When later questioned, Franks told The Mirror that Montel was held for about 15 minutes. He said the whole ordeal lasted less than an hour.

I wrote Franks and asked, “So on a scale of 1 to 10 (10 being your pants are on fire) how stressed was Montel to get stopped for his medical weed in the Frankfurt airport? Was he annoyed? Does he typically have to worry about this when he travels?”

Franks stressed that the German authorities showed great compassion toward the former talk show host who speaks openly about a longtime condition of Multiple Sclerosis. Once Montel showed them a doctor’s note, he was free to proceed with his European vacation — and his weed, which he uses to manage pain.

Franks said the Germans didn’t realize just how famous Montel is until the end. But even if they had watched his talk show or HealthMaster blender YouTube videos, it does not appear that they wouldn’t properly investigate.

“Fair to say it was stressful,” Franks replied by email. “BUT – he wants to emphasize that he was treated very professionally by German officials – all they wanted was to see a doctor’s recommendation and they let him go within about 15 mins (best guess) of being provided it. He feels like they treated him like someone with a serious illness and he believes they didn’t realize he was famous until the very end of the encounter.”

Thankfully a national disaster was averted.

“He was not annoyed at all – no problem whatsoever with an Law Enforcement verifying the legitimacy of a prescription and nothing but good things to say about the way the officers (unsure if they are properly called officers) treated him,” the spokesman continued. “Simply put, he believes he was treated 100% fairly and we have relayed that to the State Department and asked them to pass it on to whomever the appropriate German official is. The whole thing lasted less than an hour.”

As for how often Montel is stopped for his weed when traveling, Franks said, “This is a problem seriously ill folks who rely on medical marijuana on the advice of their doctors face every day. He’s no exception.”

Montel’s political director also released a statement to the masses on social media. 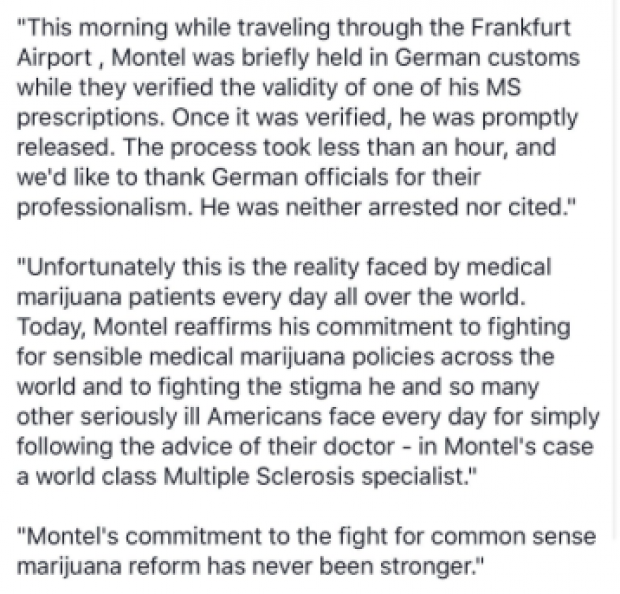 Williams has been in the news as of late. He showed up to an event with Caitlyn Jenner at the RNC in Cleveland. He also got into a nasty fight with FNC’s Bill O’Reilly and refused to appear on his show from the convention. O’Reilly called Montel a “coward” and the former talk show host lost it, brought up his 22 years of military service and resurrected O’Reilly’s divorce proceedings, which he said included physically abusing an ex-wife.

O’Reilly — or “homeboy” as Montel referred to him — said Montel will never be welcome on his program again.

The feeling is mutual. Montel said he’d appeared on the program three times and does not care. In a Periscope video, he declared, “Leave me alone. I DON’T CARE!”

Hopefully he’ll be able to rest and relax on his vacation and give Twitter, Periscope and the trivialities of the outside world a rest.