The Democratic Party’s platform on energy and climate has shifted dramatically leftward, putting the party in sync with the climate policies advocated by its wealthiest donor, billionaire environmentalist Tom Steyer.

Steyer, who made the bulk of his money as a hedge fund manager at investment firm Farallon Capital, has spent this election year pouring millions of dollars into the campaign coffers of Democratic candidates. All that money may be paying dividends, as the Democratic Party platform’s policies on climate change reflect those of Steyer’s.

Steyer brags about the shift. “It is a quantum leap forward from four years ago,” Steyer said, adding that, “I think we have the most progressive environmental platform in the history of the Democratic Party and in the history of American politics.”

Leaked emails show that Steyer intentionally sought to purchase policy changes with political contributions in violation of his own maxim.

The new party platform mirrors the green billionaire’s objectives, in that it requires the U.S. to generate at least half of its energy from non-carbon-emitting sources such as solar and wind by 2030. The DNC “adopted the Steyer agenda word for word,” reports E&L.

Steyer and his political action group, NextGen Climate Action,  wrote a report earlier this year titled, “Fact Sheet: Powering America With More Than 50 Percent Clean Energy by 2030.”  The recommendations in the reports are shown here alongside the planks developed earlier this week by the Democratic Party. 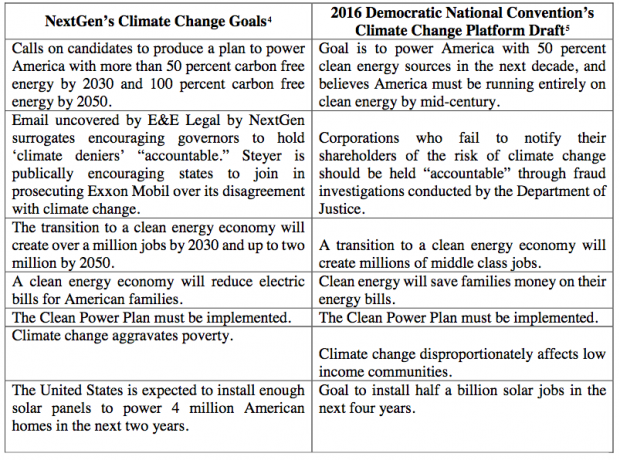 Steyer shoveled nearly $7 million into the PAC, bringing his total donations to the group to $18 million, according to an Associated Press report July 21. Steyer aso managed to contribute nearly $32 million to Democratic political candidates in 2016.