Donald Trump unknowingly started a national debate Monday night when he posted a photo on Twitter of him enjoying a bucket of Kentucky Fried Chicken. 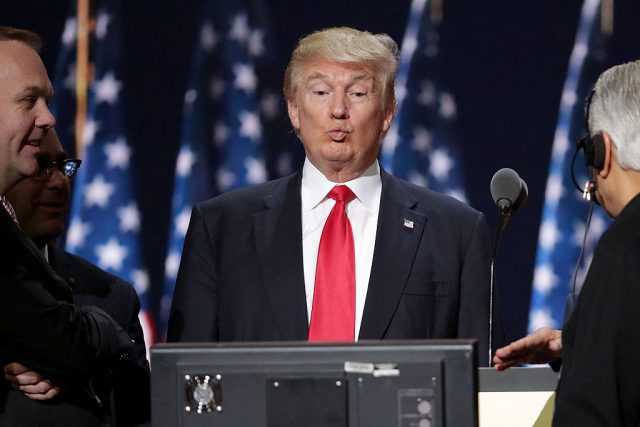 The Republican nominee was leaving a rally in Pennsylvania when he stopped at the fast food chain to pick up what looks like an eight piece bucket meal with a large side of mashed potatoes and gravy.

“Great afternoon in Ohio & a great evening in Pennsylvania – departing now,” Trump tweeted alongside the photo. “See you tomorrow Virginia!”

People were furious that he chose the Kentucky chain over Popeyes Louisiana Kitchen or Bojangles’ Famous Chicken ‘n Biscuits.

@realDonaldTrump really #trump everyone knows that KFC is for Hillary supporters. You gotta eat #Popeyes

@realDonaldTrump Eat shit—oh, I see you already are.

Poor choice Mr. Trump. Popeyes would have been the way to go https://t.co/CqepLfLPCb

Donald Trump eats KFC over Popeyes, I knew I couldn't trust that man.

Trump is eating KFC instead of Popeyes? Lost some major points there.

Trump posted a pic of himself on a plane eating KFC.
The stupid ass is a billionaire and doesn't buy Bojangles.
UNFIT TO LEAD.#Trump

Some of his followers were angered because he was eating the dish with a fork and a knife.

@cullend @pourmecoffee the fork and knife really kills it tho

@carnojoe @realDonaldTrump who the fuck eats fried chicken with a fork and knife?

@realDonaldTrump a fork and knife? You cannot be trusted.

Lightweight @realDonaldTrump is about to eat his KFC with a fork and knife. Sad!

And some said he was just pandering to the American people by attempting to eat like they do.

@realDonaldTrump You are very relatable.

@realDonaldTrump you eat KFC in your private jet?? You're just like us!!!

.@realDonaldTrump Look! I'm just like you. Eating KFC on a Private Boeing 757 with my custom leather seats. We'll #MakeRussiaGreatAgain

Eating fried chicken with a knife like he's the Queen of England. But yeah, he's a man of the people. https://t.co/NE69O7LUVu