After being detained in the Frankfurt airport Friday for about 15 minutes because of marijuana powder found in his suitcase, Montel Williams proceeded with his vacation.

Or whatever you want to call it when an ex-talk show host relaxes.

From the looks of his social media platforms, Montel — even with his weed — doesn’t relax. He tweets. He looks at the ocean. He continues getting angry about Donald Trump‘s candidacy for President of the United States.

He spends time on a boat, but it’s not his boat. Remember, he’s from the hood.

Since when did Montel Williams become a politician who can’t flaunt his riches?

“Hello from my vacation on the Adriatic Sea,” he wrote on Instagram. 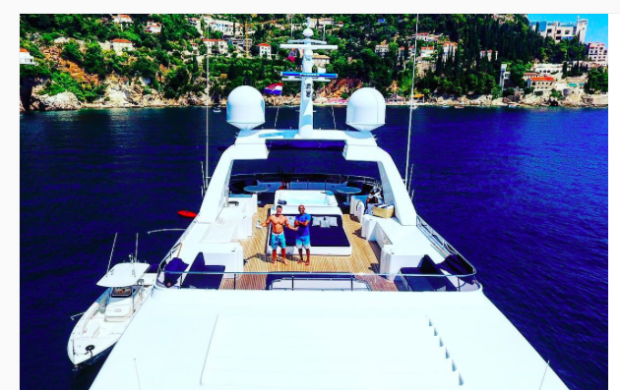 When a follower expresses envy, Montel assures him he’s in the same, er, boat, as he is.

“I wonder what it’s like to sail on a boat that cost four times my family’s salary,” the follower wrote.

Montel replied, “Well this thing probably costs 50 times my last year’s salary so we’re in the same boat there ;)”

Montel is on vacation, but if he’s not tweeting, is his life really happening? He downplayed the boat: “It’s an expensive boat. I don’t own it,” he confided to the world. “And remember I wasn’t born rich or famous. I was born in the hood.”

At this point the follower butters him up: “That’s why you’re pretty cool, I’d say. You get it.”

Montel eats up the cool compliment and replies, “I don’t think income makes you part of the 1% – it’s to what extent you UNDERSTAND the 99% because you’ve been there.”

Um…payday loans? Has anyone explained to Montel that these are horrible for poor people?