Khizr Khan, the Muslim father of a slain American soldier, is an attorney who has previously written in a law journal about Islamic law. He specifically wrote about the purity of the Quran and the Sunnah over all other texts and interpretations.

Khan rose to fame after speaking at the Democratic National Convention Thursday and pulling out a pocket U.S. Constitution imploring if Donald Trump had even read it.

Khan wrote “Juristic Classification Of Islamic Law” in the Houston Journal of International Law in 1983. In it he breaks down different levels of Islamic law. Khan writes that the Quran and the Sunnah which were both directly created by the Muslim prophet Muhammad were the only sources in Muhammad’s lifetime that “were recognized as binding.”

“The Shari’ah-was completed during the lifetime of Prophet Muhammed, in the Quran and Sunnah. This brings up an important fact which is generally overlooked, that the invariable and basic rules of Islamic Law are only those prescribed in the Shari’ah (Quran and Sunnah), which are few and limited,” Khan continues to write. “All other juridical works which have been written during more than thirteen centuries are very rich and indispensable, but they must always be subordinated to the Shari’ah and open to reconsideration by all Muslims.”

In the journal article, Khan goes on to explain the importance of Islamic laws and interpretations to Muslim followers. He writes that: “The present form of the Quran is one and the same in every part of the Muslim world, and it has been so all through the centuries. This, Muslims believe, is due to the fact that the compilation and arrangement of chapters was completed-under divine instructions-by the Prophet himself.”

It is due to this that Khan writes, “to Muslims, the Quran being the very word of God, it is the absolute authority from which springs the very conception of legality and every legal obligation.” 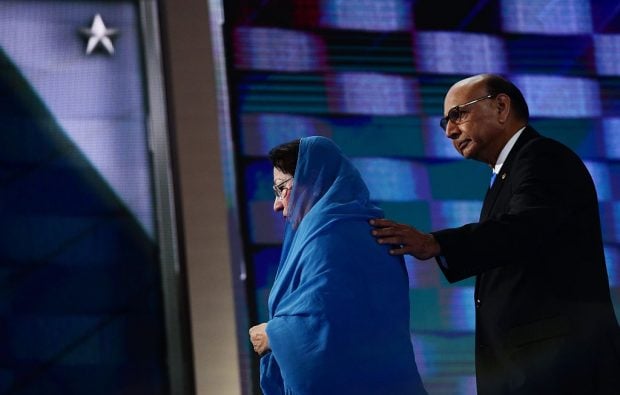 Khizr Khan (R), accompanied by his wife Ghazala Khan (L), walks off stage after speaking about their son US Army Captain Humayun Khan who was killed by a suicide bomber in Iraq 12 years ago, on the final night of the Democratic National Convention at the Wells Fargo Center, July 28, 2016 in Philadelphia, Pennsylvania. / AFP / Robyn Beck (Photo credit should read ROBYN BECK/AFP/Getty Images)

The Muslim attorney writes that, “it has to be admitted, however, that the Quran, being basically a book of religious guidance, is not an easy reference for legal studies. It is more particularly an appeal to faith and the human soul rather than a classification of legal prescriptions.” Khan added that, “the major portion of the Quran is, as with every Holy Book, a code of divine exhortation and moral principals.”

The attorney has law degrees from Punjab University in Pakistan and Harvard University.

Khan then goes on to write about the Sunnah. This is the “human, though prophetic, clarification of the Quran by Muhammed.” The rest of the journal is about interpretations of Islamic law by Islamic jurists distant from Muhammed himself. These are called Qiyas.

Khan includes quotes from Islamic scholars about Qiyas. One of them is from Said Abu Hanifa, who says it is, “slanderous is their saying that we give our qiyas any priority over the Shariah. Do we need opinion when there is a sacred text?”

A short biography of Khan in the journal article says that he is the author of “In Defense of OPEC” and “Legal Index of the Quran.” It also lists that he is the co-founder of Journal of Contemporary Issues in Muslim Law. Both these texts and the journal were not able to be found in a search of academic databases.