The University of Wisconsin-Milwaukee has issued an online guide which instructs students to use an exotic set of pronouns to refer to students and professors who refuse to admit they are either males or females. 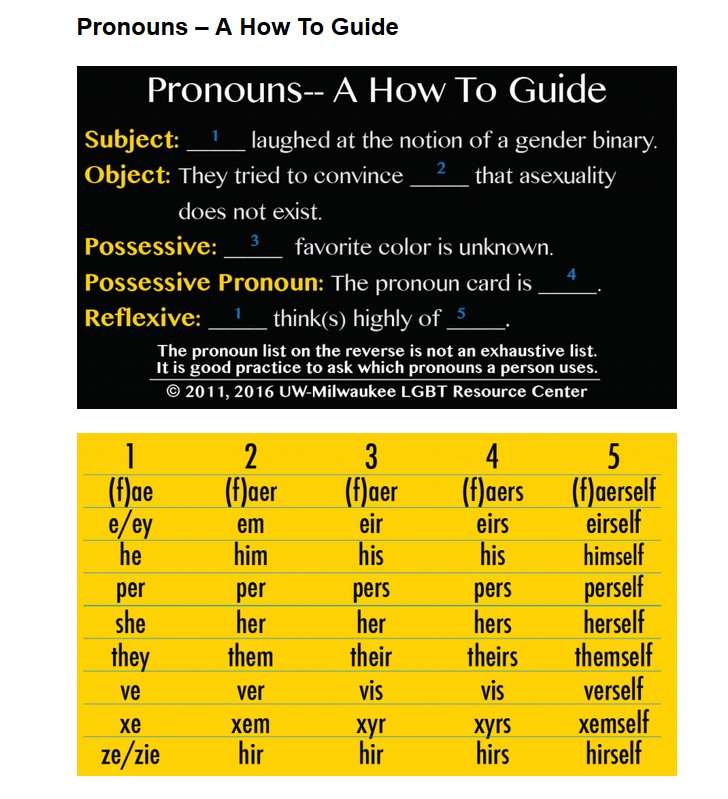 The various pronouns are to be used instead of long-established and conventional English pronouns such as he, she, him, her, himself, herself, etc.

The hard-to-follow chart lists many variations of the new pronouns. However, all of these variations are “not an exhaustive list” of the pronouns students may choose for themselves. 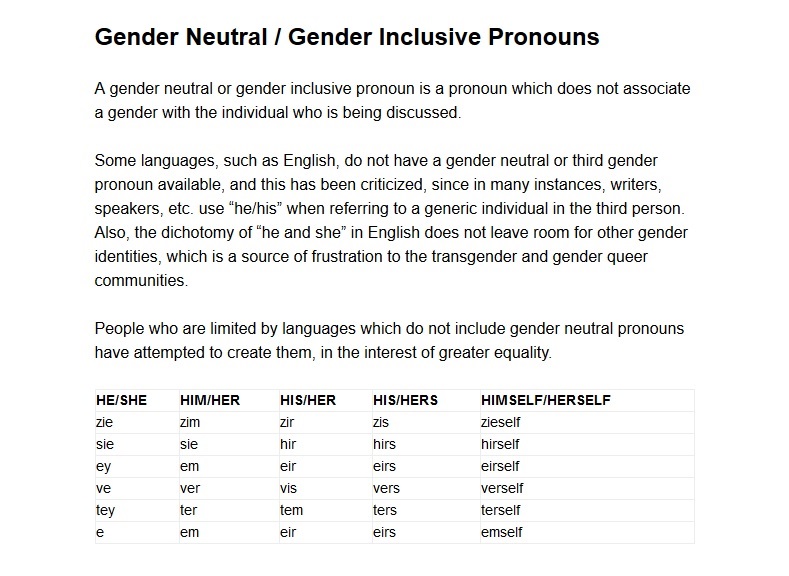 “She, her, hers and he, him, his are the most commonly used pronouns,” a lengthy section of frequently asked questions explains. “Some people call these ‘female/feminine’ and ‘male/masculine’ pronouns, but many avoid these labels because, for example, not everyone who uses he feels like a “male’ or ‘masculine.'”

The FAQ does not explain the number of people comprising the “many” who “avoid these labels.”

In any case, the instruction manual says in bold: “Never, ever refer to a person as ‘it’ or ‘he-she’ (unless they specifically ask you to.) These are offensive slurs used against trans and gender non-conforming individuals.”

Group settings with unfamiliar people may require an intricate ritual of introductions during which individuals indicate the pronouns they expect everyone else to use.

“For example, I’m Xena, I’m from Amazon Island, and I like to be referred to with she, her, and hers pronouns.”

The guide urges students at UW-Milwaukee who are enlightened about pronoun usage to correct other students when they use the wrong pronouns.

“In your classes, you may hear one of your students using the wrong pronoun for someone,” the guide says. “In most cases, it is appropriate to gently correct them without further embarrassing the individual who has been mis-gendered.”

However, more serious action may be required. “If other students or faculty are consistently using the wrong pronouns for someone, do not ignore it! It is important to let your student know that you are their ally.”

The thing to do, the guide declares, is to “approach” the victim of intolerable pronoun use “and say something like ‘I noticed that you were getting referred to with the wrong pronoun earlier, and I know that that can be really hurtful. Would you be okay with me taking them aside and reminding them about your personal pronoun? I want to make sure that this group is a safe space for you.”

Take heart. “Your actions will be greatly appreciated.”

“It is a privilege to not have to worry about which pronoun someone is going to use for you based on how they perceive your gender,” the UW-Milwaukee pronoun guide warns. “If you have this privilege, yet fail to respect someone else’s gender identity, it is not only disrespectful and hurtful, but also oppressive.”

The UW-Milwaukee Lesbian, Gay, Bisexual and Transgender Resource Center employs two full-time, taxpayer-funded staffers. They are Jeanette Martín, “a first generation Chicana” who believes passionately in social justice, and Jennifer Murray, who uses “the framework and lens of her lived experience with the Social Justice Training Institute.”

In June, The Daily Caller exposed a guide issued by the University of North Carolina at Chapel Hill which instructed students that Christmas vacations and telling a woman “I love your shoes!” are “microagressions.” School officials responded to the resulting publicity by deleting the webpage containing the guide. (RELATED: University Of North Carolina: CHRISTMAS VACATION Is A ‘Microagression’ Now)