The rumor of Brady’s new workout partners began when former Patriots running back Kevin Faulk made the claim on NESN.

“He’s definitely gonna work. No doubt in my mind. He’s probably gonna do the same regimen he’s been doing for the last however many years he’s been playing football. I’m almost positive Wes Welker is gonna be there and (Brady) probably will reach out to Randy and Randy will come because Randy’s in good shape,” Faulk said. (SLIDESHOW: This Gorgeous Woman Might Be The Sexiest Girlfriend In The NFL) 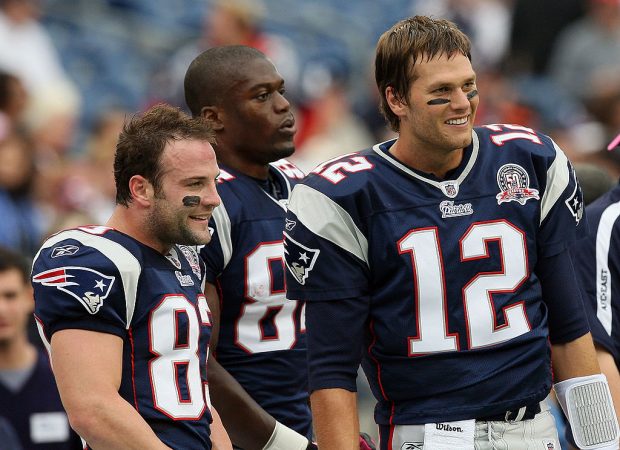 FOXBORO, MA – OCTOBER 4: (L-R) Wes Welker #83, Benjamin Watson #84, and Tom Brady #12 of the New England Patriots, stand on the sideline before a game with the Baltimore Ravens at Gillette Stadium on October 4, 2009 in Foxboro, Massachusetts. (Photo by Jim Rogash/Getty Images)

The Patriots signal-caller is banned by the NFL from communicating with his teammates while serving a four-game suspension for his alleged role in ‘Deflategate.’ (RELATED: EXCLUSIVE: NFL Owners Furious With Goodell — ‘It’s Time For A New Commissioner’)

Backup quarterback Jimmy Garoppolo will start for the Patriots in his absence.