Facebook ruthlessly cracked down on a popular Muslim voice in Britain for calling Islamic State “inbred,” only to restore the man’s profile within an hour of The Daily Caller News Foundation’s inquiry. 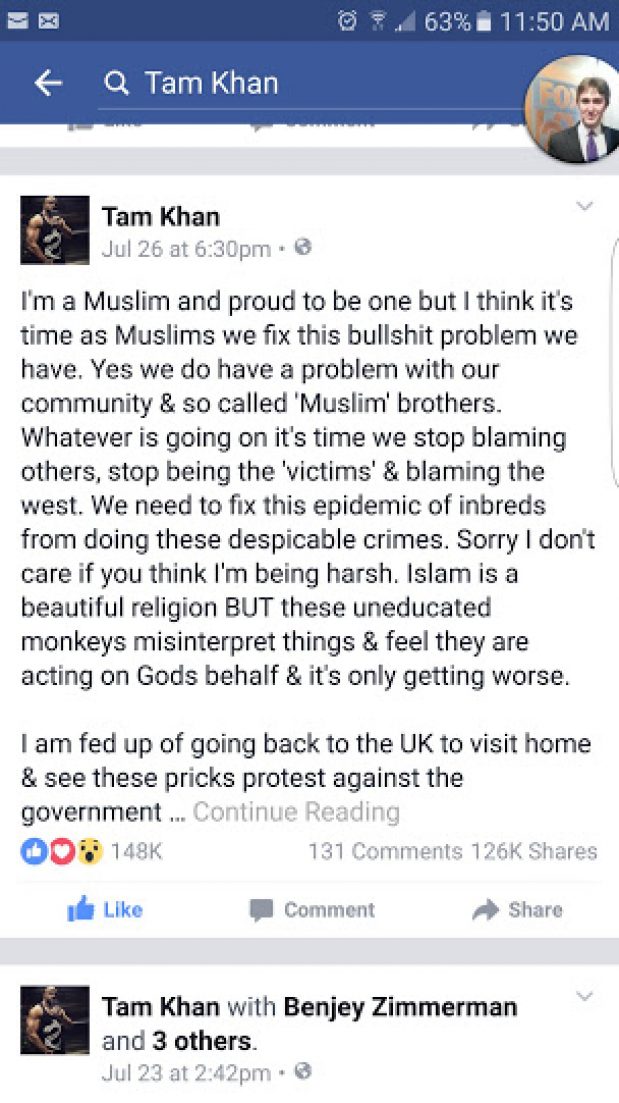 “I’d love to see these people talk crap in Muslim countries,” Khan continued. “They would be smashed in seconds. Locked up & tortured.”

In an exclusive interview with TheDCNF, Khan vented his frustration, asking, “Why even try?” He lamented that “negative sells.”

“If we start speaking out there’d be less problems and eventually there’d be nothing to write about and the media wouldn’t have stories. Police shootings, cops killing minorities, Muslim clerics, they only see the headlines. They’ll look at a few pieces and make their judgments. The media gets the reaction they want and it makes more money for them,” Khan says.

Khan expects the media to push “negative” things, but not Facebook. “I am not sure why Facebook, a social media platform which is neutral, at least supposed to be, people’s opinions, different cultures, would have an issue. And that’s what I’m surprised about,” states Khan.

Khan continued, saying, “I received over 60,000 emails in my inbox from Muslims and non-Muslims, and all faiths. I had people saying, ‘We were very anti-Islamic and we hated Muslims, and you showed us that Muslims are just like us and that we are all the same.’ It shows what the people really want. Surely this is a sign that this kind of thing is what people want to see. They want an end to violence. I know that sounds far-fetched like a Miss University speech, but you never know – this could be the start of many things.”

Khan said his inspiration for the post was simple, “In recent years I have seen a change, a small fraction of crazy people who want to ruin it for others and unfortunately they did. I wanted to stand up and say, ‘Stop what you’re doing.’ This way, they non-Muslims will see the real true meaning of Islam, which is peaceful.”

“And then my post suddenly just vanished; it was very coincidental – it’s never happened to me before. I found it very strange that they deleted my account with no prior warning. This was a bit shocking to me.”

TheDCNF contacted Facebook for a statement, and a Facebook representative provided this response: “The page was removed in error and restored as soon as we were able to investigate. Our team processes millions of reports each week, and we sometimes get things wrong. We’re very sorry about this mistake.” But it was only an hour after TheDCNF reached out to Facebook that Khan’s Facebook account was reinstated. TheDCNF contacted Facebook at 1:55 p.m. EST, which is 10 p.m. in the United Arab Emirates (UAE), where Khan is located. His Facebook was reinstated at 11 p.m. UAE time.

Facebook claims the action was a “mistake,” but if so, Facebook makes mistakes largely in one ideological category. Pamela Geller, famed anti-Islam polemic and purveyor of the popular site Atlas Shrugs, is one recent example of this disproportionate dynamic.

Facebook CEO Mark Zuckerberg had to meet with conservative leaders after ex-employees came forward with allegations of newsfeed manipulation and censorship of conservative perspectives.  Immediately after the meeting, Lauren Southern, a conservative Facebook user, was banned for saying Facebook censors conservatives. She too received much the same response from the social media giant, that her profile’s ban was a “mistake.”