Donald Trump’s daughter Ivanka said on Tuesday, “I have experienced an extreme bias in terms of coverage and reporting so I try to distance myself from that.”

Appearing on Fox News’s “On The Record” with Greta Van Susteren, Ivanka said that it is “hard” to be the daughter of a candidate and experience the “viciousness of the attacks.”

“But my father is strong and he is tough. And it’s probably harder on me than it is on him,” Trump said. “But it’s been an amazing journey.” 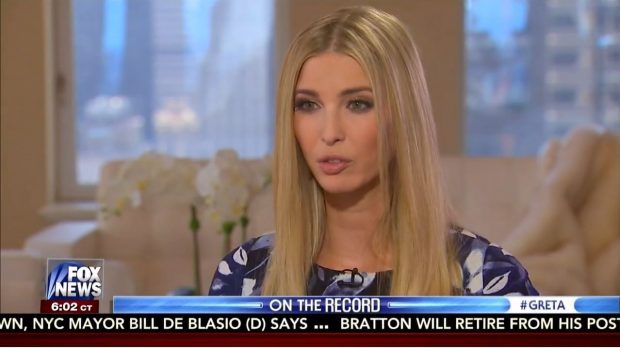 Van Susteren then noted from her experience of talking to many children of candidates that it is more difficult for the kids to deal with the negative coverage than the candidates themselves.

“It is challenging,” Trump replied. “I can handle differences of opinion. It’s harder, I think labeling and accusations and when I hear things said that I know to be false. that’s more difficult for me.”

“At the same time, you know, the comfort I take is obviously knowing the man and knowing my father and the fact that I know his strength through this process. And he is a great source of reassurance to me, you know, when I get upset by what I hear.”

Van Susteren then asked if Trump reads the coverage of her father, to which Ivanka replied, “At this point it’s actually almost impossible to read everything that’s written. So I read the papers always in the sense of keeping up with the news. I try try to read the papers less in terms of their editorializing on my father, the campaign and sort of all the noise.”

“I have experienced an extreme bias in terms of coverage and reporting so I try to distance myself from that and really try to just stay on top of current events,” Ivanka replied, adding that she tries to “make it a little less personal for myself.”

1
15 People Died In The Protests And Riots Following George Floyd's Death. Here's Who They Are
US
2
'This Is A Sham': Tucker Blasts Health Care Professionals Who Signed Letter Exempting George Floyd Protests From Coronavirus Restrictions
Media
3
82-Year-Old Attacked For Holding A Trump Sign Gets Emotional When He Receives A Call From Donald Trump Jr.
US
4
'You Are Something Else': Trump Chastises PBS Reporter After She Interrupts Him With Questions During Bill Signing
Media
5
Trump Orders Thousands Of US Troops To Leave Germany
World