Both CNN and MSNBC have recently started fact-checking Donald Trump with chyron headlines that run across the bottom of their broadcast screens in order to call attention to the Republican’s contradictory or false statements.

But the same standard is apparently not being applied to Hillary Clinton, who gave a speech on Friday at a convention of black and Hispanic journalists in which she repeated numerous debunked claims about her private email system.

The news networks’ use of the fact-checking chryons has been hailed by many journalists as the wave of the future of political news coverage.

CNN began using the chyrons in June after Trump gave inconsistent statements about his support for a nuclear Japan.

“Trump: I never said Japan should have nukes (he did),” read a June 2 chyron.

The network fact-checked Trump’s son, Eric, on whether his dad apologized to the parents of Capt. Humayun Khan, a Muslim soldier who was killed in Iraq in 2004. Trump criticized Khan’s parents after they spoke out against him at the Democratic National Convention.

“Trump says he watched (nonexistent) video of Iran receiving cash,” read a chryon published in response to the GOP nominee’s claim that he saw video footage of a U.S. government airplane dropping off $400 million in cash in exchange for four American prisoners.

Neither network fact-checked Clinton on Friday when she repeated false statements about her use of a private email system.

CNN ran various chryons during the forum and after, including: “Clinton: I’ve been ‘consistent’ on email explanations.” 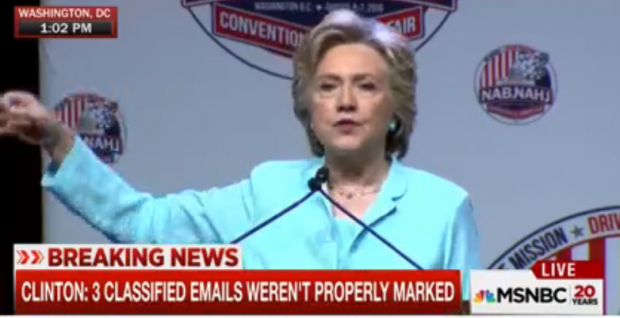 CNN’s decision not to fact-check Clinton’s claims in real-time is especially interesting given that the network aired a segment with anchor Jake Tapper earlier on Friday calling Clinton out for her email deception.

“That is not true,” Tapper said during the fact-checking segment, which was paired with the chyron: “Clinton repeats debunked claim about FBI probe.”

Tapper pointed out that although Comey did testify that Clinton was truthful during her interview with the FBI, Clinton has given inconsistent statements about whether she sent or received classified emails.

“Clinton repeatedly told the public that none of the emails contained information that was classified in any way,” Tapper said.