The latest Crystal Ball general election map of the Electoral College from Larry Sabato reflects recent poll numbers and predicts a November loss for Republican presidential candidate Donald Trump that will be worse than the drubbing Mitt Romney suffered in 2012 (but not quite as bad as the slaughter suffered by John McCain in 2008). 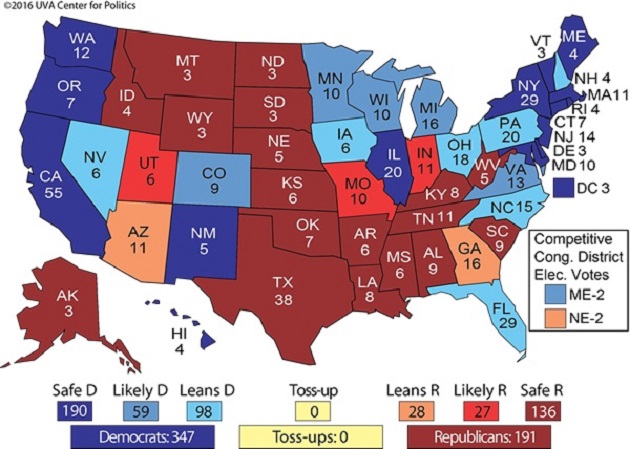 Sabato’s total allocation of electoral votes — 347 to 191 — remains unchanged, he says, though his confidence levels have changed for some states.

In a slight twinkle of hope for Trump, Sabato and his Crystal Ball team have changed Pennsylvania from “Likely Democratic” to “Leans Democratic,” which means the prognostication is less sure.

In bad news for Trump, though, both Virginia and Colorado have gone the other way: from “Leans Democratic” to “Likely Democratic.”

Sabato’s map has zero toss-up states — by self-imposed rule to keep himself from copping out.

“Polarization in this hyper-partisan era means that practically nine of 10 voters are committed, and the unknown is whether they can be motivated to cast a ballot,” the professor explains. “Presidential job approval, the state of the economy, war and peace, and a few other items reinforce partisanship and turnout, and influence the few truly swingable votes among hard independents.”