Referring to the news aggregation website run by Matt Drudge, Costello said, “I want to go back to something you said about Hillary Clinton’s supposed health concerns because I did notice, Jeffrey, that that was the headline on the Drudge Report all weekend long. Will Donald Trump go there?”

“Well, I think Donald Trump is willing to point out things that other people have been pointing out for years here in terms of her temperament,” Lord replied. “She is the one trying to make the argument about temperament, and yet nobody seems to want–” 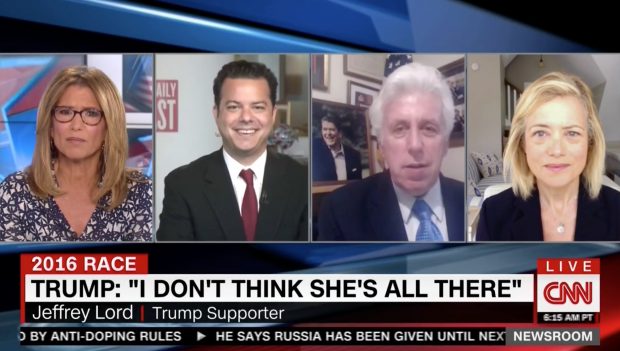 Interrupting Lord, Costello said, “Well, no, no not temperament. Because what the Drudge Report is saying that is that Hillary Clinton tripped on the stairs and somehow that calls into question her physical health.”

[dcquiz] “Yeah, I honestly have no idea what — I haven’t checked the Drudge Report this morning, so I don’t know,” Lord replied. “But certainly, I do remember that she did have some health problems. I thought she did fall and hit her head on something, and as I recall, this was a reason that she had to wear a particular set of glasses, you know. There was something there, a number of months ago, yes.”

“She’s has totally recovered from that, though,” Costello said, defending Clinton.

“OK, fine. But was it a health problem or not?” Lord replied. “Apparently yes, it was.”

Over the weekend, Drudge linked to stories of Clinton when she needed assistance in climbing stairs in 2016, her 2012 blood clot in her brain, a 2011 fall while boarding an air plane, as well as her 2009 fractured elbow when she fell on her way to the White House.

One of the accompanying photos on the Drudge Report was a Reuters image captured by Jonathan Ernst of Clinton losing her balance while touring a substance abuse recovery center in North Charleston, S.C., Feb. 24, 2016.