“At least she doesn’t look like she’s homeless anymore.”

That’s all it took to upset ESPN’s shapely blonde bombshell Britt McHenry, who then went on Twitter and complained about the line found in a recent story about her. But her tantrum didn’t end there. She then blocked at least two reporters who work for the pub that published the piece — one who wrote it and another who minorly tweeted about it.

McHenry mindfully deleted that second tweet. But let’s get this straight: there’s NOTHING worse than a reporter saying she looks a little homeless? How about no legs, 9/11, cancer or getting the Zika virus?

But seriously, this is all rich coming from McHenry.

After all, ESPN suspended her in 2015 for a week after she yelled at a female attendant at a car impoundment lot. We’re talking sorority-level catty bitchfest. She trashed the woman’s looks, saying, “Lose some weight, baby girl.” She insulted the woman’s education level, assuming the woman had no degree: “That’s why I have a degree and you don’t,” she said. “I wouldn’t work at a scumbag place like this. Makes my skin crawl even being here.”

After the attendant critiqued McHenry’s hair roots, the sports broadcaster suggested that she’s only a step above homeless. “Oh, like yours, ’cause they look so stunning, ’cause I’m on television and you’re in a (expletive) trailer, honey,” she railed.

And then, perhaps, the worst line of them all: McHenry picked on the woman’s teeth. “Maybe if I was missing some teeth they would hire me, huh?”

McHenry apologized profusely — who wouldn’t when your lucrative TV job is on the line?

The aforementioned “homeless” line at the top of this writeup appears in a story by The Daily Caller‘s sports reporter David Hookstead, in which he also complimented McHenry by writing that that she looks “dashing.”

Asked why he chose to include the line about her looking homeless, Hookstead told The Mirror, “I said she looked homeless as a joke. I was pointing out the obvious irony that in the video where she is berating that woman, McHenry looks extremely disheveled. It’s ironic how low her own situational awareness is, which is what spawned the joke in the first place.”

Daily Caller reporters attempted to interact with McHenry about the squabble. She wound up being friendly only to Datoc but not my other two male coworkers. Please note: She did not block Datoc on Twitter (thank God).

Here’s how McHenry reacted to that: 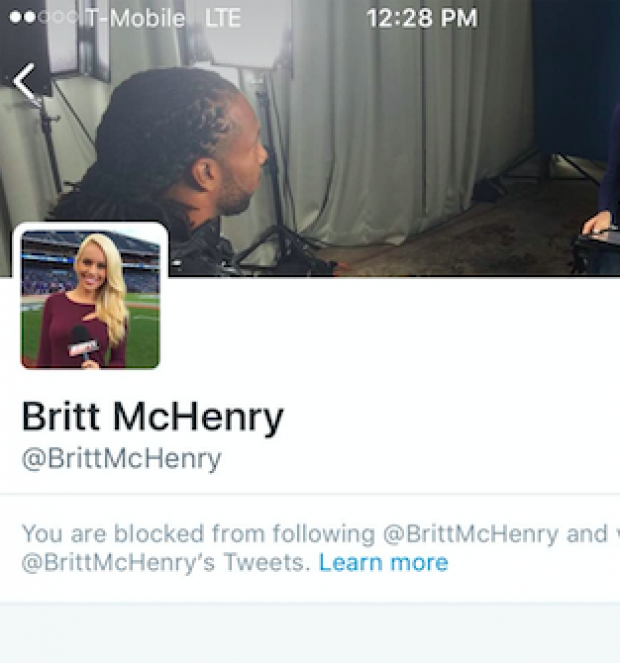