The Big 12 received a letter from national LGBT groups on Monday urging the college athletics conference to bar prospective new member Brigham Young University from joining as an expansion school.

[dcquiz]The letter, signed by 25 groups including Athlete Ally and GLAAD, raises concerns that BYU’s religion-based honor code will give rise to “homophobia, biphobia and transphobia both on and off the field of play.”

“Currently, the Big 12 as a conference is overwhelmingly LGBT-inclusive,” the letter continues. “BYU, conversely, actively and openly discriminates against its LGBT students and staff. It provides no protections for LGBT students. In fact, through its policies, BYU is very clear about its intent to discriminate against openly LGBT students, with sanctions that can include suspension or dismissal for being openly LGBT or in a same-sex relationship.” 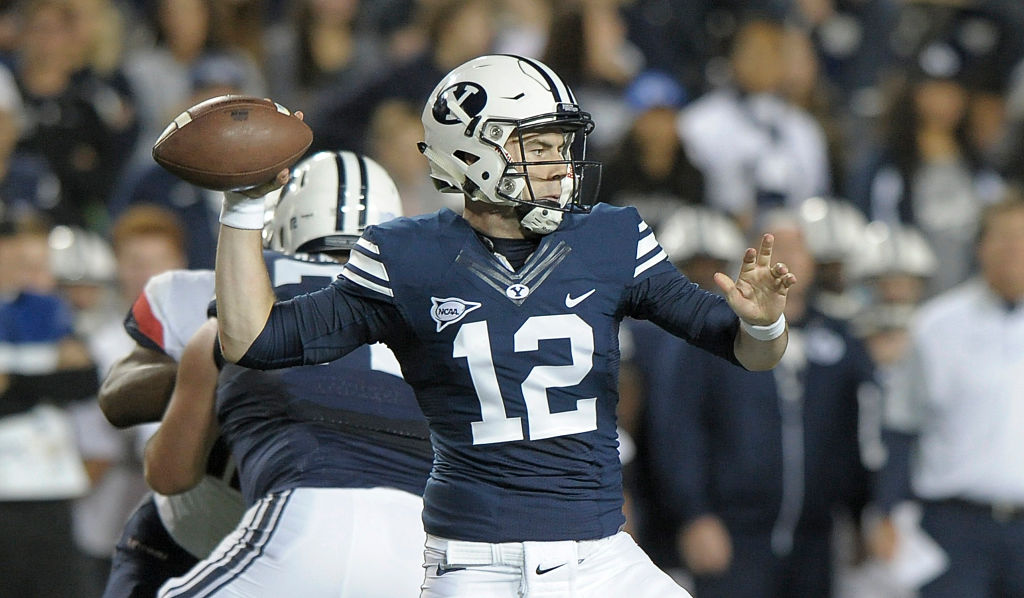 Quarterback Tanner Mangum of the Brigham Young Cougars throws a pass during their game against the Connecticut Huskies at LaVell Edwards Stadium on October 2, 2015 (Getty Images)

As a private university, BYU has the right to mandate all students and faculty maintain behavior consistent with tenants of the Mormon faith.

While engaging in same-sex relationships is strictly forbidden under the university’s honor code, the same code specifically states that the school will only “respond to homosexual behavior rather than to feelings or attraction and welcomes as full members of the university community all whose behavior meets university standards.”

“One’s stated same-gender attraction is not an Honor Code issue,” the university explains. “However, the Honor Code requires all members of the university community to manifest a strict commitment to the law of chastity.”

BYU sparked a national dialogue when former Cougars basketball star Brandon Davies was dismissed for violating the school’s ban on pre-marital sex in 2011.

Prior to the 2011 NCAA tournament, Davies voluntarily told school officials about his sexual relationship with his then girlfriend.

At the time, the sophomore guard was averaging 11 points per game for the No. 3-ranked Cougars.

Teammate and former NBA player Jimmer Fredette told ESPN that Davies “told [the team] he was sorry and [had] let us down.”

“We told him it’s OK,” Fredette explained. “Sometimes in life we make mistakes. We’ve got to play through it.”

According to Fox Sports, BYU — along with Cincinnati, Colorado State, Connecticut, Houston, Memphis, UCF and USF — are all being considered for admittance to the Big 12.