Hillary Clinton was referred to as the Democratic nominee by a party official in multiple internal memos before the Democratic primaries even began, documents obtained by The Daily Caller reveal.

The memos were sent from Andrew Piatt, southern political director for the Democratic Congressional Campaign Committee, to multiple Democratic congressmen and party officials. They date back to May 13, 2015, months before the first primary contest on February 1, 2016. (RELATED: New Democrat Leak Reveals Passwords And Congressmen’s Phone Numbers)

[dcquiz] The documents detail Piatt preparing officials and congressmen for meetings and calls with potential Democratic candidates in Pennsylvania’s 7th congressional district. “We expect the Philadelphia suburbs to be a major battleground in the presidential contest this cycle and the Clinton campaign will fight hard on the air and on the ground to win this swing area of the state,” Piatt wrote.

The recipients of the memos include Democrat Minority Whip Steny Hoyer and Rep. Ben Ray Luján, also DCCC chairman. The 19 memos referring to Clinton as the nominee date from May 13, 2015 to January, 19, 2016. There were five other Democratic primary candidates during this time period. 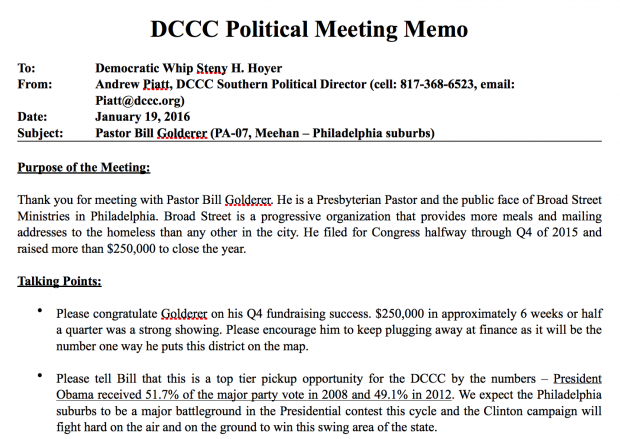 The DCCC is the most recent Democratic group to experience a leak after Democratic National Committee’s emails were released by WikiLeaks last month. Those emails also showed a bias towards Clinton over other Democratic candidates, including remarks from former DNC Chairwoman Florida Rep. Debbie Wasserman Schultz disparaging Vermont Sen. Bernie Sanders and his campaign.