Files released to The Daily Caller by hacker Guccifer 2.0 indicate his hack of the Democratic Congressional Campaign Committee (DCCC) includes donor information and memos dating all the back to early 2005.

Some files released to the public by Guccifer 2.0 contained the personal phone numbers of Democratic congressmen, as well as passwords of sites used by DCCC members. (RELATED: New Democrat Leak Reveals Passwords And Congressmen’s Phone Numbers)

One folder released to TheDC is titled “Chelsea” and contains fundraising information going back to 2005. 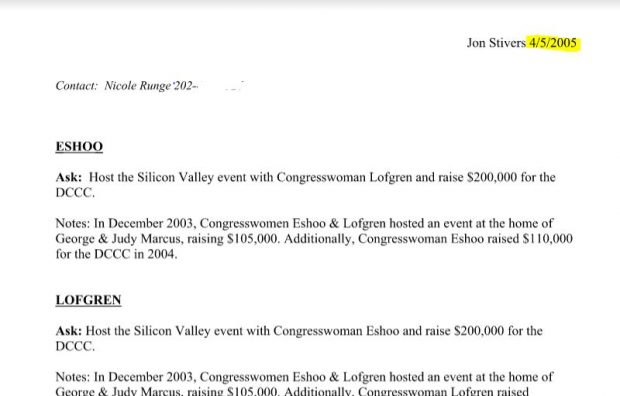 Included in the folder is a document labeled “Stivers” that appears to have been authored by former Nancy Pelosi staffer Jon Stivers. The document is dated April 5, 2005.

[dcquiz] Another document is dated May 20, 2005 and contains a schedule of DCCC events.

Several other documents include fundraising strategies for the 2006 election cycle.

Another folder contains information on the amount of money given to Republicans and Democrats by insurance corporation AIG.

A spreadsheet titled “AIG Money to House Dems and Rs” tracks AIG donations to members of Congress between 1990 and 2008.

More information on the DCCC hack will be reported as it becomes available.