It’s over. Univision has emerged as the winner of the contest to buy Gawker Media.

Second in the fight was Ziff Davis.

The sale happened in an auction Tuesday.

It may not be the bore that it sounds under Univision’s umbrella — after all, the company also owns The Onion.

According to media reports,  a U.S. bankruptcy judge will have to cement the deal.

A hearing is scheduled for Thursday.

Gawker founder Nick Denton told CNN Money, “We could not have picked an acquirer more devoted to vibrant journalism.”

Earlier in the day on Twitter, he boasted about Gawker Media‘s online traffic. 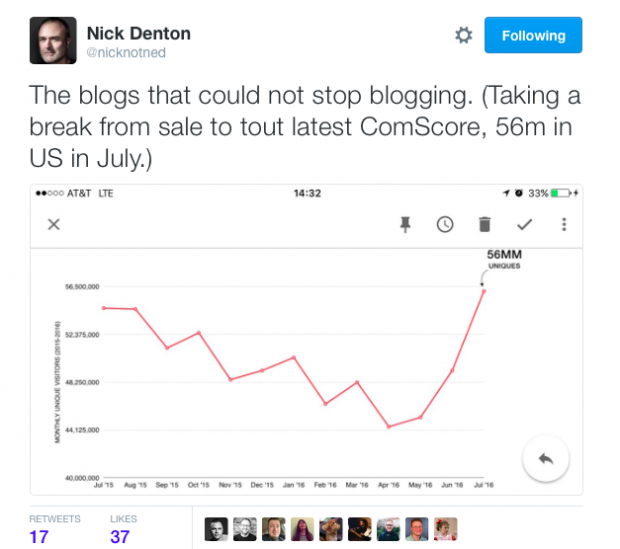 “In all seriousness, Univision + Gawker seems like a good match and a decent end to the awful Thiel saga,” Vox Executive Editor Matthew Yglesias wrote on Twitter.

More emotion came from Gizmodo writer Matt Novak who wrote, “Apropos of nothing, I’d just like to say with all sincerity that working for Gawker Media and Gizmodo has been the best job I’ve ever had.”

But now is as good a time as any to dump on Peter Thiel, who funded Hulk Hogan‘s lawsuit that ultimately led to Denton having to file for bankruptcy and put Gawker Media up for sale.

“One more time: It’s okay to be critical of some of the things Gawker published, but still believe that what Peter Thiel did was wrong,” wrote Fortune mag’s Mathew Ingram.