“What gift should I get newly bankrupt Nick Denton for his birthday next week?”

Answers included: a soul, a Costco gift card, a piggy bank and a copy of his sex tape.

‘SAYS WHO’ IS THE BEST PHRASE OF THE CAMPAIGN

“From now [on] I’m just responding ‘Says who?’ to anyone who questions my opinions.” — Washington Free Beacon‘s Sonny Bunch.

Trump’s Lawyer Michael Cohen makes an ass of himself on CNN with two words: ‘Says Who?’

(He doubts that the polls really indicate that Trump is losing.)

The Atlantic’s Ron Fournier manages to be funny

“My hands are normal size.”

— Ron Fournier, author of Love That Boy and Detroit bound.

“Hiring Steve Bannon to run the Trump campaign isn’t rearranging the deck chairs on the Titanic. It’s aiming the ship at an iceberg.” — RedState‘s Ben Howe.

“Not crazy to think that Drudge will be brought in to run campaign by late October.” — The New Yorker‘s Ryan Lizza.

“Is your diarrhea of the soul troublesome? Definitely.” — U.S. News & World Report‘s Robert Schlesinger. Read the whole column about Trump’s relationship with the media.

And this: “Speaking for myself – and I’m an opinion writer so bias is a feature, not a bug – the biggest reason I want you not to change, Donald, is because I have grown to genuinely loathe you over the last year and I want to see you not simply lose but lose, to borrow your word, bigly.”

“Things Trump has been called on CNN…in August:

“Was up in the mountains staffing a wilderness camp for teens, zero trump news for two weeks, I think I might just keep this going here.” — @unkyoka, freelancer.

“Look at this picture of this guy. That’s not a street fighter. That’s a Dunkin Donuts patron.” — Politico Florida Playbook writer Marc Caputo after looking at this photograph: 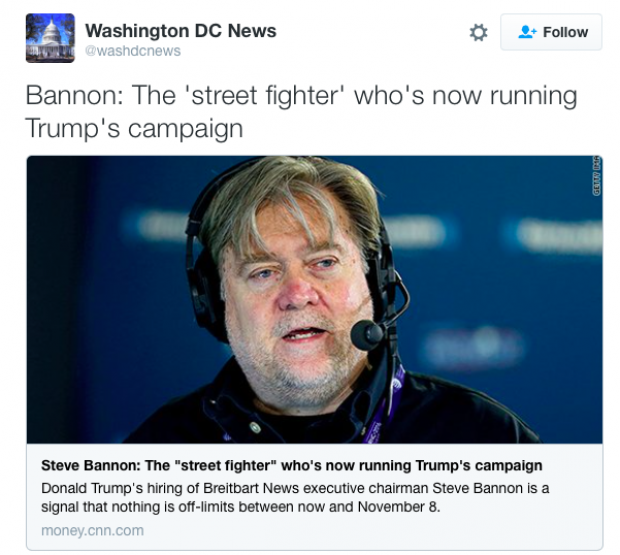 “So Ken, how was your day?
— boarded Delta flight at 2 pm in DC for 2:50 flight to Minneapolis
— flight took off at 6:30pm
— missed connecting flight in Minneapolis to Sacramento
— No flights to Sacramento remaining tonight. Earliest I could get to Sacramento is a 1:30pm Wednesday. So I decided to book 10:26pm flight to San Francisco.
— flight to SF delayed until 1am, which is now. Will arrive in SF in 3 hours 15 minutes. Which will be after 5am Eastern time.
— did I mention nonstop crying baby one row behind me?
— did I mention non-stop crying Kenny?
— still to come: once I land, a one hour drive from SF to Sacramento.
How was YOUR day?”

“It’s too bad that I never got to go on The McLaughlin Group. I used to watch that show every week as a child, which probably explains a lot. CSPAN and Fox could never replicate the thrill of sitting across from McLaughlin as Pat Buchanan rightly interrupts Eleanor Clift. That show reflected a real love, joy, and style in American politics that nasty millennials will never understand. RIP John. Keep moderating the debates up in Heaven.” — Breitbart News‘s Patrick Howley.

“The McLaughlin Group inspired me to move to Washington. I would leave all-day keg parties to watch the Pat Buchanan, Bob Novak, Jack Germond and Eleanor Clift go at it. Eventually, I would get a chance to meet all of them in my professional career. In fact, I talked to Eleanor yesterday. It really was a historic show that brought big issues to life to college kids like me. I’m not in college any more. Sad day. But one thing that I find awesome is that John kept working till the last moment.” — John Feehery, communications strategist.

“The good folks at “Washington Week” have asked me to substitute this Friday as Gwen Ifill takes a well-deserved night off. As a frequent guest, it’s a terrifying thrill to get a chance to sit in. More details to come, but I’d be grateful if you joined us. Check your local PBS listings.” — WaPo‘s Ed O’Keefe.