“Eric, did you see Mr. Trump’s tweet?” the email begins.

“Hillary’s post-convention bump is coming to an end,” the missive then announces. “This is our moment to show the country we’re ready to WIN.” 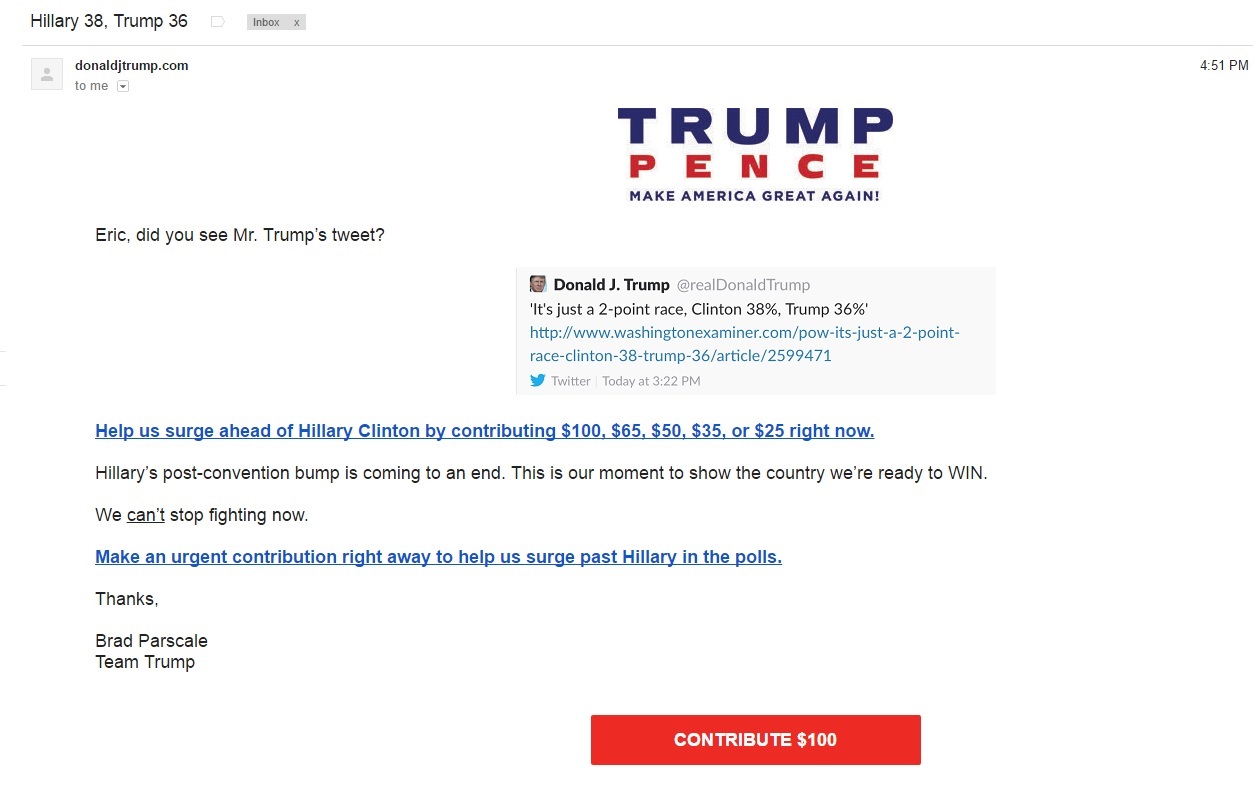 The email also seeks “an urgent contribution right away” to help the Trump campaign “surge past Hillary in the polls.” The suggested donation range is between $25 and $100.

Parscale is a web designer based in San Antonio and one of Trump’s earliest hires for his presidential campaign.

The tweet mentioned in the email is a Tuesday story by Washington Examiner reporter Paul Bedard.

“The convention polling bumps for Democrat Hillary Rodham Clinton and Republican Donald Trump are over,” Bedard writes, “and they are practically even, according to a new poll of likely voters.”

The poll Bedard cites was conducted by Zogby Analytics.

“Clinton and Trump in Statistical Tie; Trump Has Closed the Gap Among Older Millennials,” the Zogby poll headline states.

The margin of error in the poll is 2.8 percent, according to Zogby. The poll was conducted on August 12 and 13.

Zogby Analytics does not appear to describe how the likely voters were contacted, or what their party affiliations are.

“Since our last poll in early July, Clinton still maintains a small 2 percent lead over Trump,” Zobgy analyzes. “It seems the convention bumps are behind us and we are back to a close race.”

The Zogby poll is currently an outlier. Most polls now show Clinton leading Trump by 6.7 percent in a two-way race. In a four-way race (with Johnson and Stein), Clinton leads Trump by 6.2 percent.

Pollster Nate Silver has Clinton up nationally by 4.8 percent.

1
Antifa Group To March Alongside Pro-Gun Protesters In Virginia
US
2
Texts From A Mysterious Belgian Number Shed Light On Possible Surveillance Of Ambassador To Ukraine
Politics
3
'I Want Trump Out!': Migrants Plan To Cross US Border Once Trump Leaves Office
World
4
9th Circuit Court Of Appeals Deals Brutal Blow To Teens Who Sued Trump Over Climate Change
Energy
5
Exclusive: Republican Iraqi Refugee Running Against Ilhan Omar Opens Up On Her Friendship With Ambassador Killed In Benghazi Raid
Politics