A man allegedly attacked a 68-year-old cancer survivor at a garage sale in Tennessee, punching him in the jaw and dislodging a tooth because the older man was a Trump supporter.

Vester Bullock of Oak Ridge, Tenn., said in an exclusive phone interview with The Daily Caller he believes he was targeted because of his political views.

Bullock, who wears a big red Trump pin on his hat, said he was helping out at his friend’s garage sale Saturday morning when a man showed up early and offered him $5 for a staple gun that was marked for sale for $7.

At approximately 12:30 p.m., according to Bullock, the man returned extremely agitated and starting shouting profanities at him.

“He slammed his arms, walked up to me and said, ‘my wife told me I shouldn’t trust a God-damn Republican,'” said Bullock.

When he asked the man what was wrong, he said the stapler didn’t work.

“I told him ‘I’ll give you your money back,'” said Bullock. “But he kept calling me all kinds of names.” 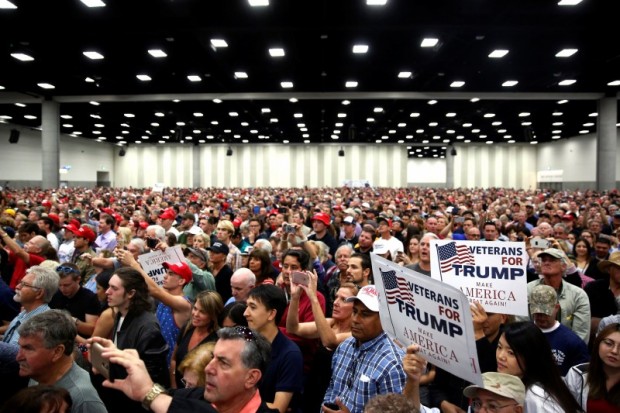 The man did not have the stapler with him, but Bullock still tried to give him $5 back. Instead of taking the money, he smacked it from Bullock’s hand and got into his truck.

“When I picked up the money, he jumped out of his truck and sucker-punched me in the jaw,” Bullock said. “Then he said something about getting a gun,” said Bullock.

Bullock was able to get the truck’s license plate number before he sped off and reported the incident to the police. He said the police initially said he would be his word versus his alleged assailant.

However, after Oak Ridge Police Department officers viewed a video of the incident, which was filmed from a camera on the property, they issued a warrant for the man’s arrest. He has a court appearance on Aug. 31.

Bullock said he plans to be there, and he thinks his assailant should have been charged with more than a misdemeanor assault.

“There was no argument, I was trying to give him his money back. He hit me with a closed fist on my jaw, knocked my tooth loose. I went to the emergency room on Sunday,” said Bullock.

“I done the right thing. When someone hits you, it’s hard not to hit back,” Bullock said.

Bullock, who is a cancer survivor, still has difficult walking and still is dealing with the aftereffects of radiation of chemotherapy. “I’m too old to get beaten on,” he said.

After hearing about the incident, Anderson County mayor responded in emails obtained by The Daily Caller that he was praying for a speedy recovery for Vester, whom he knows personally. He also condemned the attack.

“This type of intimidation and violence should be condemned on all fronts. The horrific nature of what you described below should not only be condemned from a legal and constitutional perspective that any and all of us should be allowed to engage in political free speech without fear of physical harm, but also from a human, moral standpoint that we are to love our neighbors, even when we disagree with them,” said Mayor Terry Frank.

“I am very upset and saddened that this happened in our community. I will attempt to get a copy of the police report on Monday,” wrote Frank.

In an email to the mayor on Monday, Oak Ridge City Manager Mark Watson wrote, “For your information, the review and interviews on the matter below has been handled by the Oak Ridge Police Department. A misdemeanor assault charge has been filed this morning on the suspect and an arrest warrant issued. He is being located today.”

“Viewing of the videotape was essential in this determination as there were no witnesses at the location at the time of the incident, which escalated from the purchase of a non-working $5 garage sale item. No political arguments were identified during the interview process although a statement was made by the suspect as he drove away,” Watson wrote.