It’s a real sh-t show over at Doggie Style in Washington, D.C., where the boutique pet spa is selling Hillary Clinton and Donald Trump poop bags. They’re selling the bags to see which candidate is shittier and therefore losing the race.

Hillary’s reads: “Pick up a crap with Hillary Clinton.”

Trump’s reads: “Pick up a dump with Donald Trump.”

Which pouches are selling more?

Well is that good or bad? 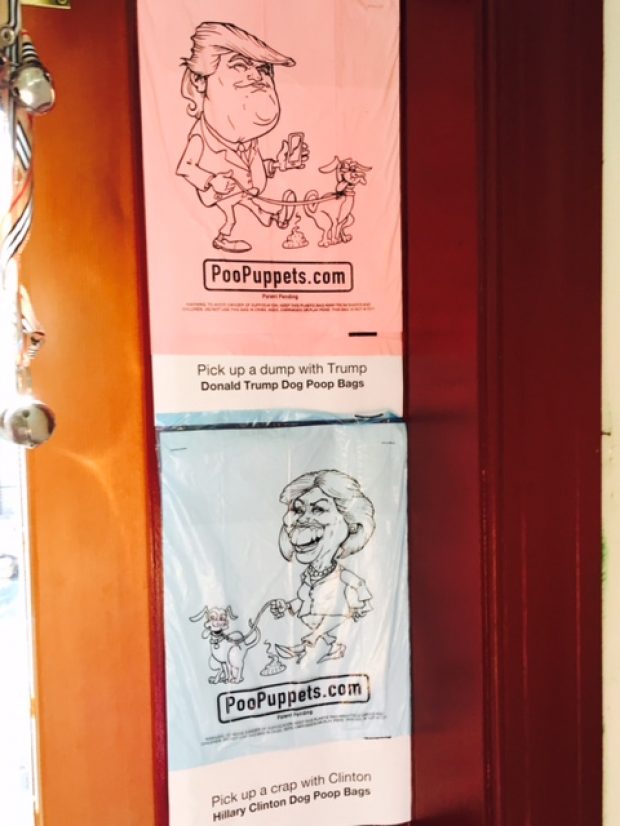 A female employee, who didn’t want to offer her name, explained that the roll out of the poop bags is also meant to push awareness for owners to scoop their pet’s excrement. She also wasn’t exact about the sales numbers. I refrained from asking “SAYS WHO?” when she told me Trump was selling more but losing.

“The Trump is selling more, but I don’t have the numbers off the top of my head,” she said.

But then again, Trump is making the Old Post Office Building downtown great again with his brand new hotel. And hell just froze over — he just apologized (sort of) for saying things he now regrets.

Get ’em while you can.

And please, WaPo “reported” media blogger Erik Wemple, keep your wife away from the pet spa.

At least The Washington Post remembers how she handled her temper back in 2003. No one wants any more shitty experiences.