Facebook’s “Trending Topics” section is at it again. Saturday morning the site ran a headline in the section declaring, “Colin Powell: Former Secretary of State Confirms He Recommended Using Personal Email to Hillary Clinton.” The only problem is Powell made no such declaration and he denied Clinton’s claim.

Once clicked, the “Trending Topics” story takes you to a picture of the two former secretaries of state with a caption reading, “Colin Powell: Former Secretary of State Confirms He Recommended Using Personal Email to Hillary Clinton. Powell told Clinton using personal email ‘vastly improved’ communication with his department, he said in a release Thursday. She revealed this to the FBI in July, the New York Times reported.” 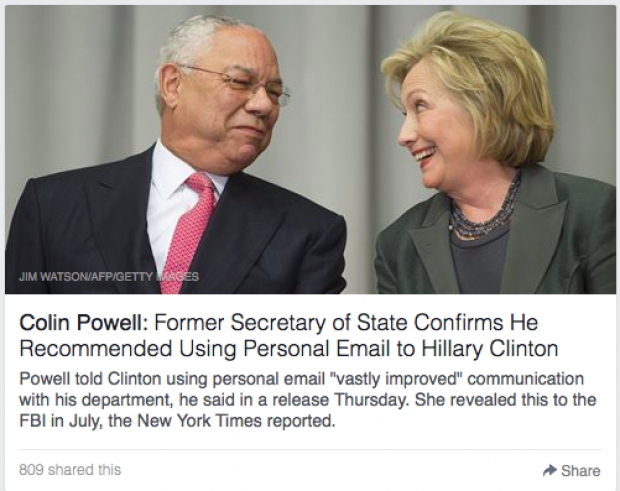 The only problem is it didn’t happen.

The “story” Facebook labeled as trending wasn’t a story at all. It contained no link to a news outlet backing up its claim with substantiation or sourcing. It mentioned the New York Times, but only in reference to Clinton’s original claim, which Powell denied.

[dcquiz] Clinton not only exclusively used private email for all her communications as secretary of state, she took the unprecedented step of setting up her own private email system and server which kept all of her communications with anyone not using an official government email address off the government grid, shielding them from Freedom of Information Act requests. The Facebook story makes no mention of this or that Clinton’s shadow email system contained classified material, something Powell’s statement explicitly said he used a secure State Department computer to handle.

When the story broke that Facebook was manipulating the news its users saw, the company denied it, although they did convene a meeting with conservative news organizations and promised to change practices.