They both appear in lovey dovey network advertisements that have them looking cozy and her looking longingly up at him.

As the pair continued to hammer their supposed good friend Trump as unfit for the presidency Monday morning, Trump went to his favorite microphone — Twitter — and insinuated he knows what the real deal is between them.

He started out with, ahem, a softball.

And then he went in for the kill. 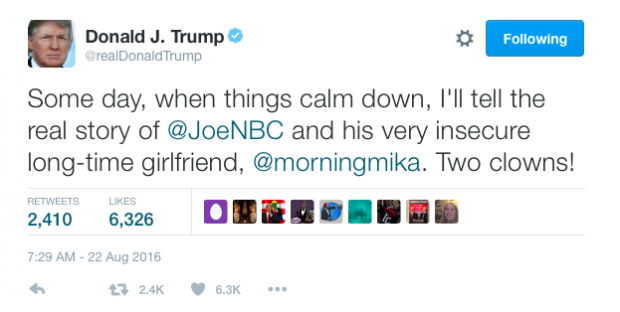 Interestingly, during Monday morning’s program, Scarborough said something to the effect of, “We were just talking about this over the weekend.”

Huh? Did he mean the hosts spent the weekend together or did they chat on the phone to prep for Monday’s show?

Whatever the case, good thing Trump has his priorities straight: outing Mika and Joe.

“Nothing like getting the campaign off to a strong start on Monday!” a Mirror tipster wrote by email.