In November 2015 we visited the legendary OSP Shooting School in Fulshear, Texas to evaluate a pre-shipment model of the Mossberg 930 Pro-Series Sporting 12-gauge semi-auto under the guidance of clays instructors extraordinaire, Gil and Vicki Ash.

Now, some eight months later, we received a production version of the shotgun. We brought it to the leafy Ravenwood Sporting Clays in Newville, Alabama, where the 930 Pro-Series Sporting fulfilled its engineering charter to become an affordable clays pulverizer.

Mossberg’s design team approached the 930 Pro-Series Sporting with explicit directives: deliver a low-recoil, 12-gauge, universal-fit, sporting semi-auto that would retail for about $1,000. The price situated the shotgun among semi-autos such as Remington’s V3, 1100 and Versa Max, the Winchester SX3 and Franchi’s Intensity and Affinity.

Admittedly, some of those other shotguns reach the $1,000 orbit through synthetic black or camo finishes, while our 930 Pro-Series Sporting featured a walnut stock and cool slate-grey receiver. Still, countless owners of hunting semi-autos use them for clays − obliterating any practical distinctions on a larger scale.

As we learned in November, Mossberg upped the price/performance ante significantly with the 930 Pro-Series Sporting by tapping Gil Ash to collaborate on stock design. Mr. Ash is a leading wing and clays coach, but more importantly he takes a scientific approach to the shotgun sports – having compiled more than 4,000 pages of data during a career of forty-plus years. He is also a pioneer in the development and use of software for shotgun instructions. His depth of knowledge goes far beyond simply logging hours and sticking patches on shooting-glasses into the realm of hard research that incorporates anatomy, ballistics and computer simulations. 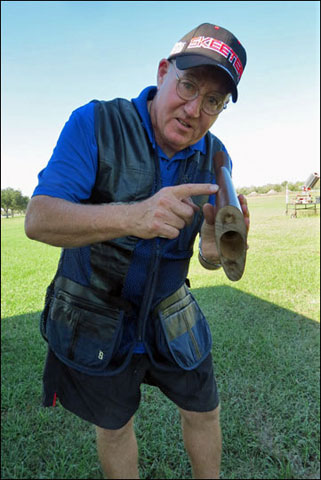 Gil Ash explained his secrets to designing the stock of the Mossberg 930 Pro-Series Sporting in November 2015 at his OSP Shooting School in Fulshear, Texas.

Clays shooters are a finicky bunch when it comes to shotgun stocks. We’ll see after-market adjustable combs, recoil pads, pseudo-tactical hydraulic struts and all manner of foam, electrical tape and moleskin in the quest to find the ideal sight picture with minimal recoil. Without doubt, Mr. Ash has seen them all.

His approach to stock configuration for Mossberg’s 930 Pro-Series Sporting focused on making the gun fit the widest possible audience while yielding minimal felt recoil. Most shotgun manufacturers produce stocks to the dimensions of the typical American guy. Mr. Ash, however, also wanted to the 930 Pro-Series Sporting to comfortably and effectively accommodate women and youngsters.

At five feet, eight inches and 190 pounds my proportions probably fall into the median of your average male shotgun owner. In terms of fit, the 12-gauge 930 Pro-Series Sporting at Ravenwood produced virtually no felt recoil while also delivering the flat sight picture that best suits my clays-shooting technique. The 14-inch length of pull worked smoothly from the low-gun ready position. 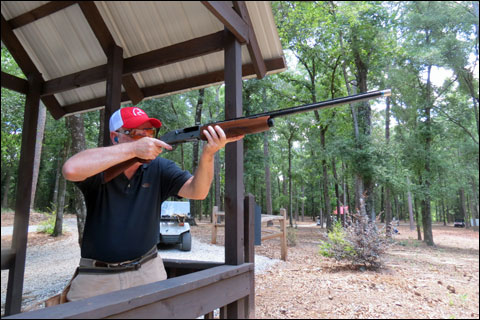 Mr. Ash attributed the stock’s optimization primarily to its narrow width. He specified dimensions that were 30-40 percent thinner than average. The thinner stock virtually eliminates the cast concerns that plague many women wing and clay shooters who suffer from recoil-induced cheek slap. Accordingly, there is no adjustable comb. The lack of a palm swell narrows the grip and makes it more accessible to a larger constituency.

Still, Mossberg includes six shims to fine tune cast, drop and pitch. The shims − inserted between the stock and receiver – raise the stock three positions higher or two lower. We shot the 930 Pro-Series Sporting as-new directly out of the box and immediately ran the quartering outgoers on Station 1 − with that level of performance continuing through subsequent stations.

Performance aside, the matte, slate-gray, aluminum receiver of Mossberg’s 930 Pro-Series Sporting conveyed the Spartan elegance of a standard Blaser F3 and F16 and Beretta’s 692 and DT11 – a clean, all-business fascia that we personally favor. The aluminum receiver is finished with Cerakote for greater resistance to abrasion, corrosion and chemicals. Likewise, the boron nitride coated gas piston, piston rings, magazine tube, hammer and sear prevents corrosion and facilitates cleaning. 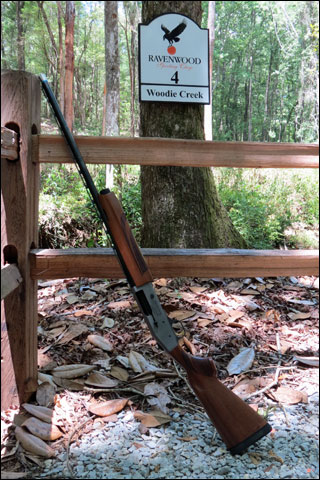 A hefty trigger guard is flat black around a gold-hued blade. The top-mounted safety and release button are oversize – good for inclement wingshooting with gloves. Plus the Briley chokes are steel-shot rated for upland and waterfowl hunts.

The semi-gloss walnut looks inexpensive with unimpressive figuring and a stippled instead of cross-hatch checkering on the pistol grip and ample forend.

The A TriComp sight utilizes nine interchangeable LitePipes, in three colors and three shapes of varied height, for superior sighting for any competitive environment. Our gun shipped with the fluorescent green, which we swapped for white.

A cut-way illustration of the Mossberg’s 930 Pro-Series Sporting.

Like most semi-autos, Mossberg’s 930 Pro-Series Sporting has a noticeable front bias that complimented the near-50/50 sight picture. Personally, those dynamics contributed to an aggressive, instinctive shooting style that expedited fast, controlled swings for decisive “see it, shoot it” results.

At 7¾ pounds the Mossberg 930 Pro-Series Sporting weighed nearly a pound more than the benchmark 12-gauge Beretta X400 Xplor Unico semi-auto with comparable barrel length. Although I prefer a lighter shotgun, the 930 Pro-Series Sporting felt more controllable and consistent than the Beretta X400 Xplor Unico – especially for someone like me who lapses into rushed gun swing (moving on the target call instead of waiting for the orange visual).

At Ravenwood, we shot 1⅛-ounce, #8 shells rated at 1,200 feet per second. Low felt recoil, complemented by suppressed muzzle jump from the ported barrel, produced excellent results on true-pair and report-pair second shots. The problem started when I loaded 1-ounce shells rated at 1,180 feet per second that lacked sufficient oomph to fully eject spent hulls (yes, the shotgun was generously oiled). Dave Miles, Mossberg’s Director of Marketing, attributed it to a prerequisite break-in period. At the OSP Shooting School, though, we had tried different 12-guage loads, even dropping down to ⅞-ounce without cycling hang-ups.

By the way, Mr. Ash’s participation with the 930 Pro-Series Sporting didn’t end with the stock design. Every new 930 Pro-Series Sporting includes a free 60-day trial subscription to the OSP School’s Knowledge Vault, a vast online repository of instructional articles and videos on clays and wingshooting by Gil and Vicki Ash that normally costs $37.50 per month.

Irwin Greenstein is the Publisher of Shotgun Life. You can reach him at www.shotgunlife.com. Click here to visit Shotgunlife.com.