CNN “Reliable Sources” host Brian Stelter has been on quite a tear lately about certain media personalities suggesting that Hillary Clinton has health problems.

He’s so appalled that anyone would say such a thing with no proof whatsoever that it sends him reeling into tirades that feel like they will last for days, weeks, or even years. They’re so irritating they could be used as torture tactics for terrorists.

So how about his own colleague, CNN’s Chief Medical Correspondent Sanjay Gupta?

Gupta marveled over the now infamous letter from a doctor giving Trump a glowing health report.

“They say he’s on a statin,” Gupta said Wednesday on CNN’s New Day. “What’s his cholesterol? You’ve indicated in some way that he has some these types of medicines he’s taking — for what, exactly? Does he have a risk of heart disease?”

Will he say the same about Gupta?

And now that we’re on the subject, what about Dr. Drew, who appears on CNN’s sister network HLN?

This is a big moment for Stelter. He has a chance to hold Gupta and Drew’s words up into the same “reckless” light that he casts Hannity’s since, after all, none of these men have any proof about any health condition the two main candidates may have. Might be a little uncomfortable in the elevator, but so what?

The Mirror sought reaction from Stelter.

And miraculously, he replied.

“One is a medical doctor and reporter,” Stelter told The Mirror by email. “The other is an advocate. One was asking, ‘Does he have a risk of heart disease?’ based on a medication Trump takes. The other was saying ‘it almost seems seizure-esque to me’ and ‘this looks like violent, out of control movements on her part’ based on an out-of-context videotape.

He added, “What I’ve been saying on the air is that there should be more reporting. What Hannity has been doing is the opposite of reporting.”

Stelter included two examples of his commentary from this week:

“I think we’re going to see both Trump and Clinton continue to be challenged to share more records. And that’s perfectly fair. You know, there’s a difference between reporting, encouraging more reporting, which we should do, versus buying into the most dramatic and outrageous of these conspiracy theories.” 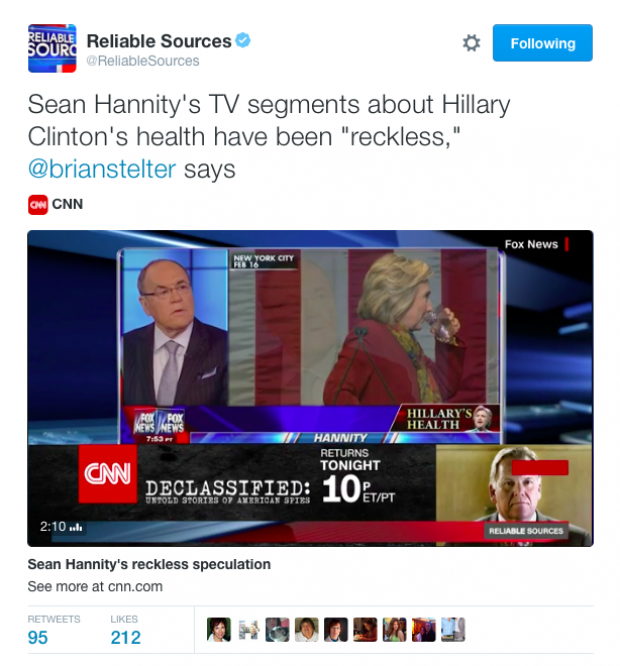