Approximately three-and-a-half years worth of Huma Abedin’s emails during her tenure at the State Department have yet to be released by the agency, suggesting that many more examples of the Clinton aide’s interaction with Clinton Foundation donors have yet to surface.

Abedin used several different email accounts while she worked as Clinton’s deputy chief of staff at the State Department. Her tenure stretched from Jan. 2009 through Feb. 2013, when Clinton left office.

But of the emails Abedin exchanged on her personal email accounts with non-State Department employees, the State Department has only released records up through July 26, 2009.

While many reporters have searched for smoking gun evidence of quid pro quo in the 55,000 pages of emails Hillary Clinton that the State Department started releasing last year, Abedin and other Clinton aides appear to have served as gatekeepers for Clinton.

In that role, they fielded requests for favors and interfaced with the Clinton Foundation, thus allowing Clinton to keep her hands clean.

[dcquiz] The State Department has provided the emails to Judicial Watch in drip-like fashion since last year, when the conservative watchdog group was forced to sue under the Freedom of Information Act. Citizens United, another watchdog group, has also received emails from Cheryl Mills, Clinton’s chief of staff.

Judicial Watch’s latest email release, which contained 725 pages of emails and occurred on Monday, contains Abedin emails spanning the period from May 3, 2009 to July 26, 2009.

The group released another batch of Abedin emails — 296 pages worth — earlier this month.

Both releases contain emails showing that Abedin and other Clinton aides sought to accommodate Clinton Foundation executives who requested favors on behalf of big-time donors.

An email included in Judicial Watch’s trove of documents shows that Clinton Foundation donors knew that they were supposed to route requests for Clinton through Abedin.

In a May 26, 2009 exchange, Benjamin Ringel, a New York real estate mogul and $25,000 Clinton Foundation donor, acknowledged that he was aware of the “system” that had been designed for Clinton requests.

A group Ringel was affiliated with was asking Clinton to send a letter of support. But Abedin told Ringel that State Department rules prohibited her from doing that.

Ringel, who has also donated heavily to Clinton’s campaigns, acknowledged that he knew Clinton would be unable to help out, but wrote: “But I thought system is run it by u always.” 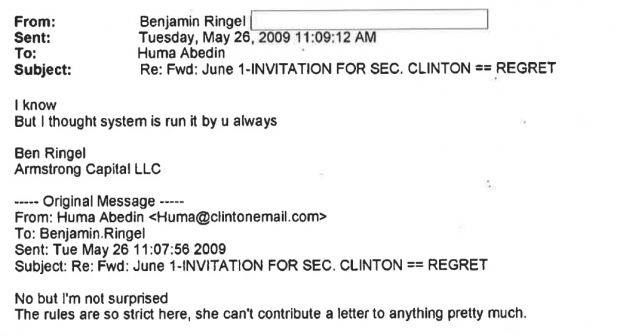 The exchange suggests that someone had informed Ringel about the “system.”

Other emails recently released by Judicial Watch provide examples of the “system.”

One email released on Monday shows Doug Band emailed Abedin on June 23, 2009 asking her to help set up a meeting between Hillary Clinton and Salman bin Hamad bin Isa Al Khalifa, the crown prince of Bahrain.

Band also asked Abedin to intervene on behalf of Paul Wasserman, a sports agent and $5 million Clinton Foundation donor. A client of Wasserman’s who played for Wolverhampton FC, a British soccer team, was having trouble entering the U.S. because he had a criminal record. Abedin offered to set up a visa interview in London for the athlete.

An email released by Judicial Watch earlier this month shows Band asked the Clinton aides for help in putting Chagoury in touch with the State Department’s point person on Lebanese issues.

Chagoury helped raise money for Bill Clinton in the 1990s. He was also an associate of Nigerian dictator Sani Abacha’s. He was convicted of money laundering in Switzerland in 2000.

This article has been updated for clarification.