From July 2013 to February 2015, Open Society Foundations, the network of political organizations controlled by left-wing billionaire George Soros, secretly paid the salaries of three key staffers to then-Moldovan Prime Minister Iurie Leanca, funneling the money through a German non-profit in order to skirt Moldovan laws against doing so, according to a leaked OSF document.

The July 2014 document, which appears to be an approved funding proposal, was one of 2,500 OSF documents published by DCLeaks, which releases documents from leaders around the world and has previously released emails from Republican Party staffers. 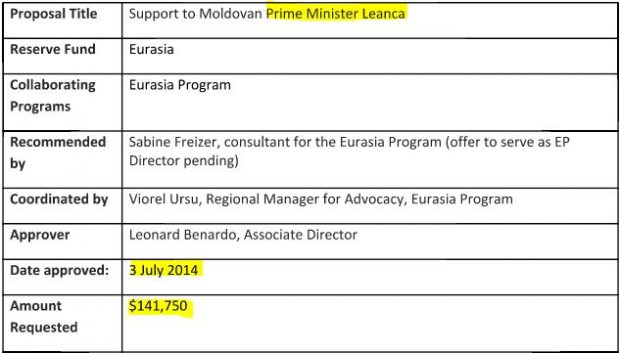 A fourth staffer, Liliana Vitu, was added to the payroll with the July 2014 proposal. Vitu, it’s noted, previously served on the board of OSF’s Moldova branch.

The proposal was approved by Leonard Benardo, who is now OSF’s regional director of Eurasia. The money was funneled through a German non-profit for the express purpose of skirting Moldovan laws, according to the leaked proposal.

“Due to the constraints in the Moldovan legislation, OSF cannot directly pay staff members of PM office,” the document notes. “The advisors will be paid as research consultants within a project run by a German think tank – the Institute for European Policies (Institut für Europäische Politik).”

OSF paid each of the four staffers $33,750 for the eight months of work between July 2014 and February 2015. The Institute for European Policies received a $6,750 administrative fee for channeling the money to the staffers.

“Eugen Sturza has led and coordinated the work of the office. He put into place the institutional framework which helps the Government to focus on its strategic priorities, including its reforms agenda,” the proposal notes.

“He has assigned tasks to advisors to make sure that strategic priorities, as well as operational issues, are efficiently addressed. He ensures the liaison between the PM’s office and ministries and departments, as well as the local authorities.”

“Valeriu Prohnitchi has provided key contribution to the development, implementation and follow-up of the PM’s economic and market reform policies,” the proposal states, later adding: Valeriu has led the work and relations with investors, the IMF, the EBRD and donor institutions.”

Kulminski, the proposal says, “has contributed to strengthening the PM’s focus on the strategic task for the country – to draw Moldova close to Europe, while also making this goal acceptable to a wider audience.”

Kulminski also contributed “to the elaboration and implementation of policies and actions in many directions, including relations with Russia, the policies of the central government in the Gagauz region, in Taraclia and in Balti. He leads development and communication priorities for these regions, and outreach to the leadership and public there.”

According to the proposal, Leanca was “very satisfied with the quality of expertise and the support his advisors provided. Their contribution proved to be crucial.”

George Soros’ backdoor bankrolling of key figures in a European government is just the latest revelation to come from the DCLeaks documents.

TheDC was also the first to report on an internal OSF memo that argued Europe’s refugee crisis provided “new opportunities” for the organization to expand its global influence.

Again, TheDC was the first to report on OSF’s apparent strategy to influence the Supreme Court’s ruling in a case involving illegal immigration enforcement.

A number of Open Society Foundations internal documents, including strategies, work plans, and funding requests, have been published after being removed from an online community that served as a resource for our staff, board members, and partners. In some cases, the materials reflect big-picture strategies over several years from within the Open Society Foundations network, which supports human rights, democratic practice, and the rule of law in more than 100 countries around the world. This attack is a symptom of an aggressive assault on civil society and human rights activists that is taking place globally.

The project described in the document you reference aimed to undertake in-depth research and explore possible recommendations on how to make headway towards resolving the seemingly intractable Transnistria conflict, an important provision in Moldova’s Association Agreement with the European Union. Part of the researchers’ mission was to share the recommendations as advice with the prime minister and his cabinet. What you call “backdoor bankrolling” is an effort to work with civil society and governments to boost democratic practice and strengthen human rights.