CROWHEART, WY–Bikers in leathers, World War II veterans in wheelchairs, farmers with their children and dogs, joined battle-hardened Green Berets — who’d fought in El Salvador, Iraq, Afghanistan, Somalia, Colombia, Panama, Philippines, Cambodia, the Balkans and “a lot of little places that don’t make the news”  — in a field near the Wind River, surrounded by sage, Indian paintbrush, cottonwood trees, choke cherry bushes and brown and red hills. They were there to dedicate the first memorial to U.S. Army Special Forces in Wyoming and Rocky Mountain region.

“We did not have a Special Forces memorial, so we built one,” retired Chief Warrant Officer Brian Bewley, who served with 7th and 1st Special Forces Groups, said.

With the idea of, “If we build it, they will come,” Bewley, and his family and friends, erected the sprawling memorial in a pasture at Grizzly Rock Ranch in rural Crowheart, formerly known as Burris.

And come, they did. Nearly 250 people attended the event, held last last Saturday.

“This memorial will allow those of us Special Forces veterans who live here, as well as those who may be traveling through the region, an outlet to memorialize those who have gone before us, served with us and those who are currently in the fight,” Bewley, now CEO of Tactical Solutions International, Inc., said.

“This memorial is vital for the ability of Special Forces veterans in the area, and the rest of the West, to demonstrate and describe the history, missions and other Special Forces’ peculiar information to their families, friends and other veterans,” Jaime said.

The memorial includes a large, ceremonial archway and rock garden promenade to the main tribute area. Enclosed in a wood-gated circle, flags fly over a granite monument stone engraved with the “De Oppresso Liber” crest, which translated from Latin means “To Free The Oppressed” — the Special Forces motto. Below the crest is a quote from President John F. Kennedy, who first authorized the distinctive beret headgear specifically for Special Forces. It reads: “A symbol of excellence, a badge of courage, a mark of distinction in the fight for freedom.” 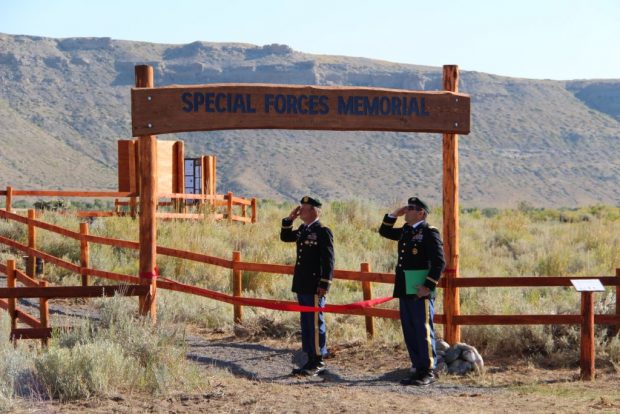 Visitors may sit and contemplate the memorial, on a wooden bench, with the words, “Land of the Free, Because of the Brave” carved into it.

Several history kiosks display photos and citations. One station acknowledges Special Forces Medal of Honor recipients. For example, the story of the first Medal of Honor for the war in Vietnam, bestowed upon Col. Roger L. Donlon, is on the wall. Another station pays tribute to Green Berets killed in action.  There is also a message board where combat veterans may leave personal notes and mementos to their fallen brothers and their families.

Retired Special Forces Maj. Christopher Brewer, who served with 7th and 1st Special Forces Groups, encouraged all to read the stories on the kiosk walls.

“Remember the men who wrote these stories with their blood. They deserve that,” Brewer said. “But understand that these are not merely tales to be told, they are a challenge to each of you who read these words: live a life worthy of their sacrifice. Stand for the ideals they represent.” 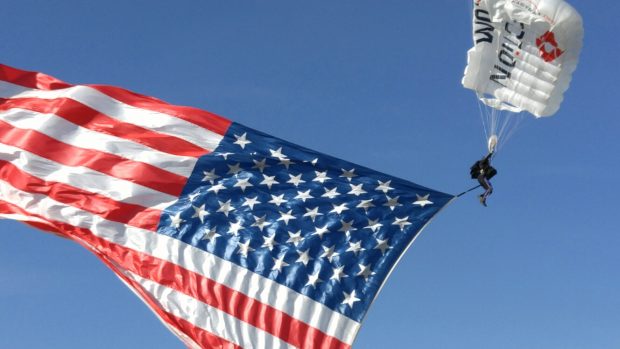 The Special Forces Creed was shared, which includes such lines as: “I will not fail those with whom I serve… I will never leave a fallen comrade… I will never surrender, though I am the last… I am a member of my Nation’s chosen soldiery. I serve quietly, not seeking recognition or accolades. My goal is to succeed in my mission – and to live to succeed again.”

Quotes and thoughts from Green Beret Medal of Honor recipients, Gary Beikirch, Drew Dix, Melvin Morris, Bennie Adkins and Col. Roger Donlon, who could not be in attendance — marked the unique bond of the Special Forces community.

“May this become a place where families may come, gather, and find comfort in knowing that there are those who care and will forever be grateful for the sacrifice made by their loved one,” Medal of Honor recipient and Green Beret medic, Gary Beikirch, shared in a note from his hospital bed in New York before undergoing surgery for cancer.

“May this also become a place where all may come, reflect and then honor that sacrifice by re-committing ourselves to the values, freedoms, and truths that have made this country free — the truth of living one’s life in service to something greater than oneself,” Beikirch, who served with 5th Special Forces Group in Vietnam, stated in the note for the dedication.

“This Special Forces Memorial recognizes Wyoming’s contribution to the brotherhood of the ‘Quiet Professionals,’ sworn to uphold and defend our nation’s freedom. It affords an opportunity to honor the fallen, remembering their commitment, duty, and sacrifice. Keeping the foundation of freedom firmly in place for future generations to build upon,” Rosser said.

Rosser also reminded everyone to reach out to veterans in their community, to make sure they’re alright. 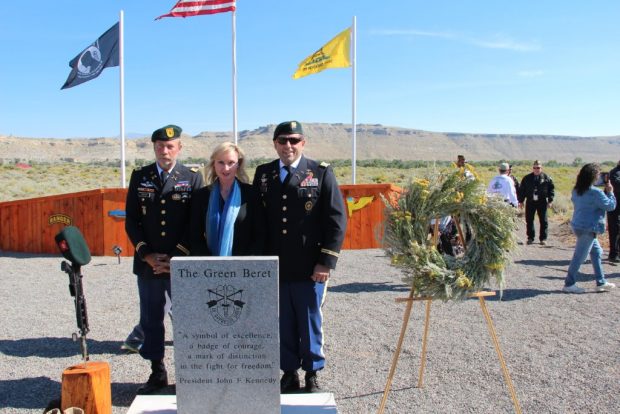 Using a Ka-Bar knife, the ribbon was cut. A Veterans of Foreign Wars color guard from Dubois, WY, raised the American flag. It flew beside a POW/MIA Flag, as reveille played and everyone stood at attention.

“It was an absolute honor to have been part of the memorial ceremony,” Qureshi said.

The Special Forces anthem, “The Ballad of The Green Berets,” played over the loudspeaker as all in attendance walked quietly under the Ceremonial Memorial Arch and up the rock pathway to the stone monument. Next to the stone, a “Fallen Soldier Battlefield Cross” consisting of an inverted M4 rifle with dog tags hanging off it, combat boots, and the Green Beret with its Special Forces Group insignia patch.

Wild mule deer, antelope, rabbits, a golden eagle, and osprey made appearances around the perimeter fence, as Bewley, in dress blues, handed over a wreath made of Wyoming sage brush and prairie flowers, to place at the monument stone. Salutes were offered as a light wind blew. The mood was solemn, befitting of the “Quiet Professionals,” some in dress blues, some in civilian attire. 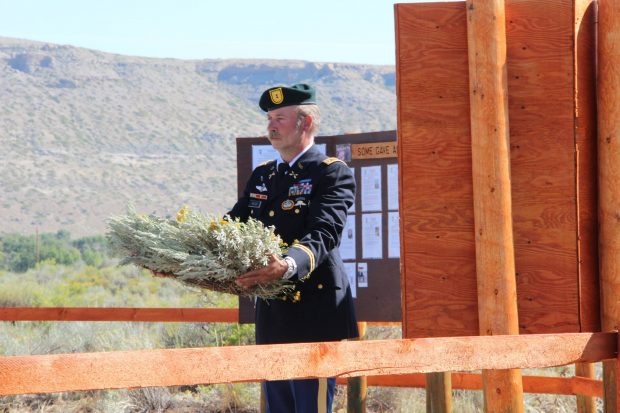 “This memorial is a reminder. It challenges us; inspires us to live a life of honor and if necessary, to give our lives in service to those we love,” Brewer said.

Along with the tribute there were shooting competitions and members of the Rock Springs, WY SWAT team demonstrated a hostage rescue and house breach.

Brewer, a former Special Forces commander, worked with counter-terrorism forces in Colombia, the Philippines and Afghanistan. He covered safety pre-checks with the SWAT team, then narrated the demonstration over the loudspeaker to give civilian attendees a taste of what elite units do downrange.

Grazing mule deer occasionally looked up behind the house until the 50-grain detonation cord in the door breaching charge went off. The deer leaped and bounded out of the field behind the house under assault, to the clapping and amusement of the onlookers. 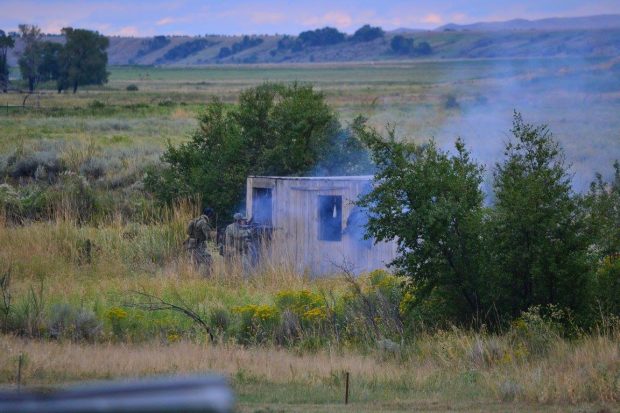 “I’m from Idaho, and I now have a place where my family and I can come and reflect on my service within Special Forces as well as to memorialize those who have given the ultimate sacrifice,” Butler said. As his way of giving back to that community, Butler, now CEO of Advanced Accuracy Solutions LLC, brought his expertise and sniper rifles along.

For long gun enthusiasts, these included: the Accuracy International AX .338 Lapua, the DPMS G2 .308 with Surefire SOCOM II suppressor, and the Armalite Super SASS .308. Butler also shared the latest Kestrel 5700 with applied ballistics, mounted on a tactical tripod with Zeiss Spotter 45, and the Vectronix Terrapin Laser Range Finder. Butler’s “students” gained an appreciation of the full sniper experience of patiently focusing on a target (in this case, a tree on a hill), through the scope, while being bitten by ants. 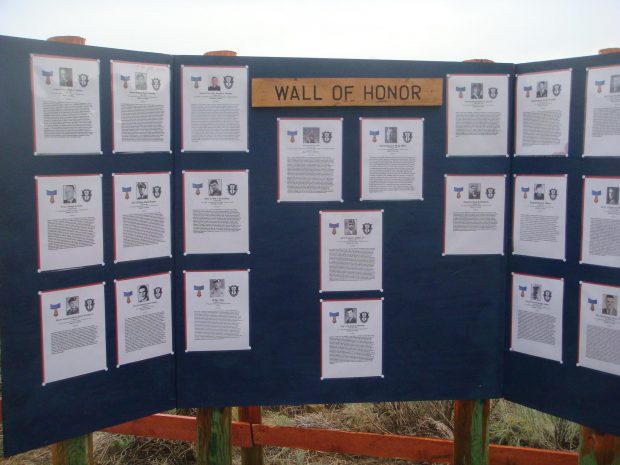 The Special Forces Memorial is open to the public and accessible during good weather, which for Wyoming means the non-winter months. Bewley and his fellow combat veterans are already planning a larger tribute event to Special Forces at the Memorial next year. It will be Aug. 18-22, 2017 during the lunar eclipse, which will be visible over the ranch.