Malia Obama was at the 9:30 club last night, a knowledgable source told The Daily Caller.

The 9:30 club is a Washington venue off U Street that hosts live music. 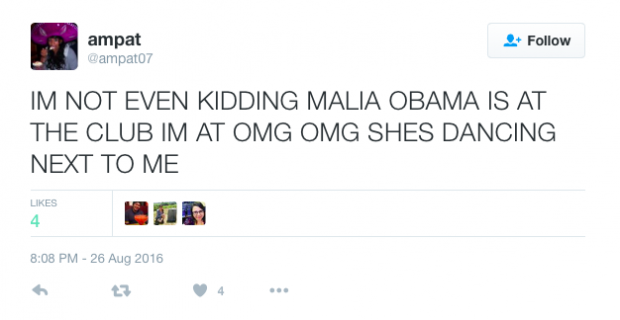 At least one Washington reporter from The Hill caught wind of the news. 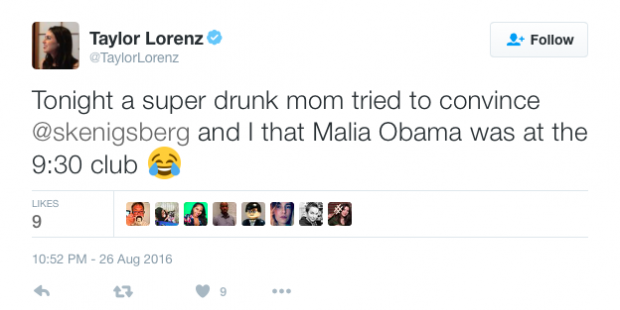 Malia Obama, 18, has been in the tabloid news as of late.

At 6’1″ it’s hard to miss her. And she is, arguably, among the most famous daughters in America.

About 10 days ago, reports surfaced that Malia had smoked weed and engaged in twerking at a Lollapolooza festival in Chicago in July. Unfortunately for the first daughter, the incident was caught on an iPhone video.

A source told RadarOnline that President Obama was irate at his daughter and even confronted her about it.

Which seems a little heavy-handed considering Obama included his marijuana and cocaine use in his memoir Dreams of his Father. According to a 2006 NYT report, Obama said he hadn’t tried heroin because he “didn’t like the pusher who was trying to sell it to him.”

“When I was a kid, I inhaled. That was the point,” he told a rapt group of magazine editors.

Malia’s fun seems much more innocent than her father’s. But it didn’t stop with the alleged pot use and wild dancing. During the family recent summer vacation to Martha’s Vineyard, Malia went to a noisy house party that caught the attention of cops who came and broke things up.

Media Research Center‘s Brent Bozell came up with the dumbest commentary of 2016: “The media leave Malia Obama alone,” he wrote on Twitter a week ago. “But not the Bush children, the Santorums, the Palins.”

Hey Bozell, Google is your friend.

Malia plans to attend Harvard in 2017.

Until then, the party’s on.