After telling Politico reporter Marc Caputo off in an epic f-bomb tirade, House GOP hopeful Dan Bongino went on his podcast to continue the verbal massacre.

He included The Mirror after I wrote this piece about him and explained that Bongino excused his behavior toward Caputo by revealing that his wife has lupus.

A little backstory: Caputo questioned why Bongino had moved to Florida in the first place and why he was living some 100 miles from where he was running for Congress. In a subsequent story in TheBlaze, Bongino spoke of his wife’s condition as the reason why he and his wife moved to Florida — warmer climate, closer to family etc… — and why he became so irate with Caputo.

In my story, I wrote, “What politician doesn’t exploit a family illness for personal gain?”

Which is apparently what set Bongino off once again like a Fourth of July firecracker. 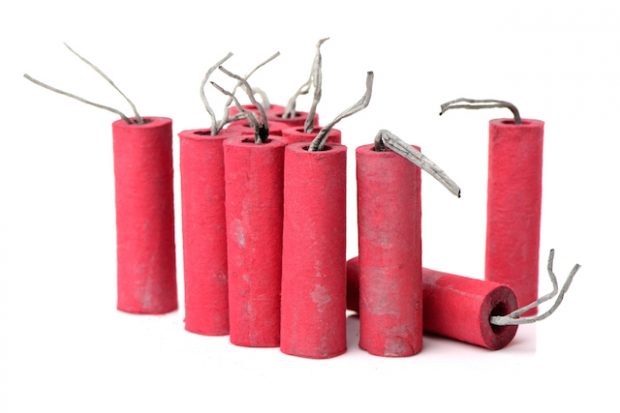 No, he didn’t start hurling f-bombs or b-bombs or even c-bombs.

Instead, he threatened me with his bare knuckles and suggested that Caputo and The Washington Post‘s Dave Weigel and I probably don’t care about our families.

“They don’t understand how sharp my knuckles are,” Bongino said on his podcast late last week.

The whole premise of the talk was: “How The Media is Ruining the Country.”

He bizarrely disparaged a story I wrote three years ago about his memoir about being a Secret Service agent. I interviewed him about Life Inside The Bubble: Why a Top-Ranked Secret Service Agent Walked Away From it All. The article was published in FishbowlDC in late 2013.

Bongino thought the story was badly written and strange. Of course I asked about his brother, whose team was involved in the Columbia prostitute scandal. When he shut down extensive conversation about his relationship with his brother, I moved on. On his podcast, he said he didn’t understand why I picked White House staff dancing like Seinfeld’s Elaine out of EVERYTHING he told me.

Even in that story, there was major foreshadowing of just how much Bongino despises the media. He probably wasn’t thrilled with me asking him to explain himself — what kind of shitty reporter does that? — or pointing out that the media actually did cover the disastrous Obamacare website.

“For example, he goes off on the media for not reporting the failure of the Obamacare website sooner, as he claimed right-wing sites did. But when asked for specifics, as in who knew the site wasn’t working before it wasn’t working, he grows just as angst-ridden in his reply but can’t list off any facts. (In other words, the so-called liberal media stinks and really should have written about the failed website sooner. As it happens, it seems that more than a few outlets are covering the matter. A Google search turns up some 60 million hits on the topic.)”

After trashing my story, he returned to a more generalized trashing of me and Politico‘s Caputo.

He said, “There’s like a low most of them won’t go beneath. It’s really upsetting me what she did. When I had that incident with the Politico guy…we’ll refer to it as ‘the incident.’ There’s a reason I got en fuego. My family matters to me a lot. You shouldn’t be dropping f-bombs but I don’t regret my fight with this guy one bit.”

He once again explained that he got so angry — or, as he puts it EN FUEGO — because of his wife’s Lupus.

“Nobody knew, I should say outside a limited circle, why I moved to the state of Florida. And the reason I didn’t disclose to a lot of my really good supporters in Maryland … was precisely because I did not want to make it appear that I was looking to garner any kind of a sympathy for political reasons. My wife was uncomfortable with it. I was uncomfortable with it. So we stayed intentionally cryptic. …I don’t enjoy politics anymore. But I enjoy a good conservative fight wherever it may be.”

Wait. He doesn’t enjoy politics anymore but this guy is running for Congress?

Bongino said, “My wife matters to me and so does my family. I don’t know if these reporter hacks, if their spouses or families if they have them, matter to them.”

The would-be politician insists he was “forced into a box to disclose” his wife’s condition.

Here’s where I’m going to stop this insanity. There was never a reason why Bongino had to disclose his wife’s lupus, an inflammatory disease that affects the body’s immune system and sounds legitimately dreadful. I certainly understand his wife’s desire for privacy and the only one who didn’t honor that was her en fuego husband Dan Bongino. He had every opportunity to control his temper and say simply, ‘A family health matter led me and my family to Florida.’

And that would have been the end of that.

At least as far as media coverage is concerned, it was his own blockheaded defensiveness that did him in. And, well, those f-bombs didn’t help.

He asked, incredulously, “Do you understand how disingenuous and unethical and immoral these people are?”

Then, a threat: “I’m telling you Joe, this will never end for them. …This is the end of the beginning…think that one through.”

He whined about reporters in general, saying, “They chase it until they can beat you into a pulp. They want you to resign or drop out. …Screams media bias.”

Referring specifically to Weigel, he said, “This clown at the Washington Post is a total joker..this guy is one of the biggest goofs I’ve ever met. This guy thinks he knows the story but all he does is reiterate Caputo’s bizarre opinion of the events.”

Bongino wound down the segment with a few rhetorical questions directed at me, Caputo and Weigel: “I look proudly in the mirror at night. Can you do the same? Are you sure about that?”

You can listen to Bongino’s rantings for yourself by visiting www.bongino.com. No free links for losers.