Sarah Palin went on an epic rant about how the media fails to question Hillary Clinton’s health.

“Leave Hillary Alone, Bullies,” Palin started out her lengthy post on her Facebook account. The former governor of Alaska then listed one reason after another why she feels the media’s failure to report on Clinton’s lack of press conferences and scheduled campaign events is hypocritical compared to how they treated Sen. John McCain when he was running for president in 2008.
(RELATED: Sarah Palin Goes Off On #NeverTrump: ‘You’re Either With Us Or Against Us)

“Aww, come on guys, give her a break,” she added. “Anyone can be out of commission for weeks on end whilst in the heat of battle for the highest office in the land. No press conferences for nearly a year?”

“No scheduled campaign events for days upon days,” she added. “No statements, no answers, no accountability, no problem. Laying low to run out the clock before November, but you’re sexist for noticing it.” (RELATED: Sarah Palin Goes On Rant About Trump-Ryan Meeting, Accuses GOP Of Helping ‘Transform America’) 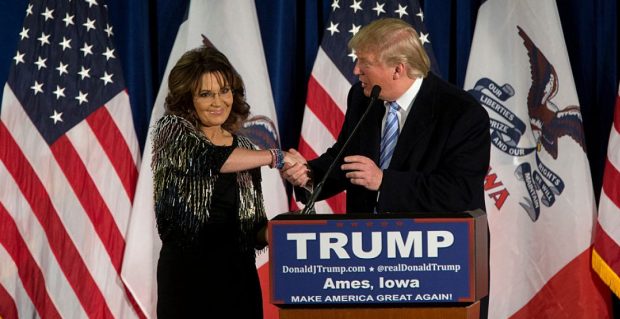 “And you’re misogynist for questioning a female’s fitness,” she continued. “Good thing media didn’t hound the crap out of ’08 candidate John McCain for his decades-old military medical records or I’d guess them to be hypocrites. Leave Hillary alone!”

“All that email-evidenced yoga, and wedding planning, and cookie-baking-grandma-duty wears you out. Believe you me,” she wrote. Heck, even those of us claiming to be fit as a (seasoned?) fiddle, hit bumps in the wellness road.  Rock-running recently, I tripped over my own two feet and crashed & burned face-first.”

“Glad for Hillary’s protective media’s precedence, ” she added. “The next woman running for POTUS has no need to answer to much of anything, for we’ve got weddings to plan, and down dogs to do, and cookies in the oven! So just leave us alone, boys.”