San Francisco 49ers quarterback Colin Kaepernick is a disgrace to America and everything great about this country.

Kaepernick has been the center of a media firestorm after he chose to sit during the national anthem before a preseason game against the Green Bay Packers. The University of Nevada product claimed that he took these actions because he feels minorities are oppressed in America. (RELATED: Millionaire NFL Quarterback Has Mind-Boggling Reason For Refusal To Stand For National Anthem)

The dual-threat quarterback isn’t a disgrace to America for protesting something he’s upset about. He’s a disgrace because he has failed at every attempt to explain his position. Kaepernick thinks that black people are murdered in the streets, but that’s one of the most ridiculous comments imaginable. It becomes even more ridiculous when it’s said without an ounce of proof.

SANTA CLARA, CA – AUGUST 26: Quarterback Colin Kaepernick #7 of the San Francisco 49ers throws a pass against the Green Bay Packers in the first half of their preseason football game at Levi’s Stadium on August 26, 2016 in Santa Clara, California. (Photo by Thearon W. Henderson/Getty Images)

However, the most disgraceful thing Kaepernick has done since this circus began is to be an open supporter of the murderous Communist dictatorship in Cuba, which is led by the Castro brothers. He wore a shirt supporting Fidel Castro and Malcom X following the Packers game. (RELATED: Colin Kaepernick’s Shirt Features A Dictator Who Banned Complaining About Racism) 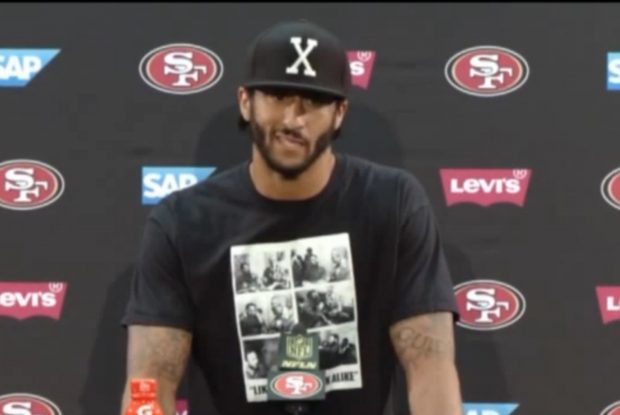 Fidel Castro has been responsible for countless deaths, and forced thousands of his own countrymen and women to die attempting to escape to America. Perhaps if Kaepernick is such a big fan of Communism then he should give up his $114 million contract and move to Cuba.

In the Communist paradise of Cuba people, are starving off of their rations, and people who disagree with the brutal regime are jailed and sometimes never heard from again. (RELATED: REPORT: San Francisco 49ers Likely To Cut Colin Kaepernick)

Kaepernick, whose Instagram is a homage to Black Lives Matter and black nationalism, has been blessed with every opportunity somebody could ever hope for. His birth parents abandoned him, a white family raised him, he received a full scholarship to play football and the NFL made him a multi-millionaire. That doesn’t sound much like oppression to anybody with a brain. He was literally abandoned by his black birth father (his birth mother is white), and was rescued by a white couple. If he has a right to be angry at anybody, it’s his black father.

Despite all those facts, Kaepernick spit in the faces of every man and woman who put on the uniform when he chose to sit during the national anthem. If he spoke out against his favorite dictatorship in Cuba while living in Havana he could get a bullet to the back of the head. In America we cherish the freedom of expression, even if you’re an uneducated idiot.

The reality of the situation is that Kaepernick’s star is fading, and has been for several seasons. He’s desperate to hang onto any sort of relevance, and this might be his final chance to grasp onto life in the NFL. He will likely be cut in the near future and out of the NFL before anybody realizes he’s even gone.

His legacy will be remembered as the uneducated coward who supported a brutal dictatorship that slaughters their own people, and as the man who disrespected the flag in front of the entire country.

Cuba can have him. Good riddance.