Hillary Clinton could not recall every briefing she received at the State Department after she fell and suffered a concussion and blood clot in Dec. 2012, she told FBI and Justice Department investigators in July.

That detail is contained in notes from Clinton’s three-and-a-half hour interview about her use of a private email system.

[dcquiz] According to the notes, which were released on Friday, Clinton claimed that she had received no instructions or direction pertaining to the preservation of federal records as she transitioned out of her role as secretary of state in Feb. 2013.

But Clinton may not have remembered receiving such guidance, the FBI’s notes state.

“However, in December 2012, CLINTON suffered a concussion and then around the New Year had a blood clot. Based on her doctor’s advice, she could only work at State for a few hours a day and could not recall every briefing she received,” the notes read. 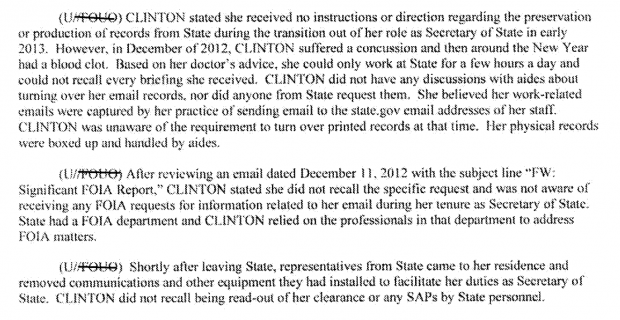 Clinton has been dogged during the current campaign by claims from Trump supporters that she is in poor health. Clinton has denied the allegations, citing a report from her doctor stating that she has recovered fully from the concussion and blood clot.