Rooms at Hillary Clinton’s two homes designated for the handling and viewing of highly classified information were not always secure, the FBI’s investigation into the former secretary of state’s emails found.

On top of that, Clinton gave statements to the FBI about those rooms — called Sensitive Compartmented Information Facilities (SCIFs) — that conflicted with other statements that witnesses made in FBI interviews.

Footnotes in the FBI’s 47-page report, released on Friday, show that the SCIFs at Clinton’s Washington, D.C. residence, known as Whitehaven, and at her Chappaqua, N.Y. home were often left unsecured.

“According to [Clinton’s State Department deputy chief of staff Huma Abedin], the SCIF door at the Whitehaven residence was not always locked, and Abedin, [Clinton aide Monica Hanley], and [redacted] had access to the SCIF.”

The same went for her Chappaqua home.

“Investigation determined the Chappaqua SCIF was not always secured,” the report notes.

The FBI’s report also notes that Clinton gave statements that contradicted with those made by Abedin and two others about the existence of personal computers in the SCIFs.

Clinton said that personal computers were never present in the SCIFs. But Abedin and Justin Cooper, a Bill Clinton aide who helped set up Hillary Clinton’s private email system, said that there were.

Abedin, Cooper and a third individual said that “personally-owned desktop computers” were kept in the SCIFs at both residences, according to the FBI reports.

But that’s not what Clinton told investigators during her July 2 interview.

“Conversely, Clinton stated to the FBI she did not have a computer of any kind in the SCIFs in her residences,” the report reads.

Since highly classified information is often viewed in SCIFs, devices that can be used to capture and transfer information — such as wireless computers and mobile devices — are usually prohibited from being used those areas.

Clinton appears to have played fast-and-loose with regulations regarding using communications equipment in other SCIFs as well.

Though Clinton was prohibited from using her BlackBerry in the executive suites of the State Department, which are designated as a SCIF, three State Diplomatic Security Service agents told the FBI that Clinton stored her BlackBerry in an area referred to as “Post 1.”

“Post 1” was located with then SCIF in the executive offices, which is referred to as Mahogany Row.

“State personnel were not authorized to bring their mobile devices into Post 1, as it was located with then SCIF,” the report states. 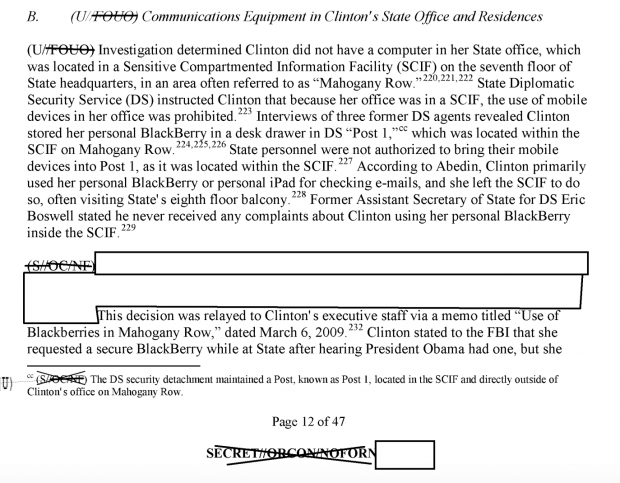