In 1950, Colt introduced the Commander, an M1911-style pistol with a reduced-length (4.25″) barrel, an aluminum frame and 9 mm Luger chambering. Originally it was designed to fill a military request for a lighter, more compact pistol. Although a major contract never materialized, the gun—referred to after 1970 as the Lightweight Commander following the introduction of a steel-frame version dubbed the Combat Commander—became popular among civilians and as been with us in one form or another ever since. Many companies, including Colt, have put their spin on the design, offering Commander-size models in various chamberings. Earlier this year, resurrected firearm manufacturer Dan Wesson—now a subsidiary of CZ-USA—began offering its take on the gun: the Valkyrie Commander.

The Dan Wesson Valkyrie Commander is available either in 9 mm Luger or .45 ACP—our test pistol stays true to the original Commander chambering and is in 9 mm Luger. M1911s in this smaller caliber are enjoying something of a renaissance among modern shooters. Because there is little meaningful difference in terminal performance between .45 ACP and 9 mm Luger when using modern defensive ammunition, the 9 mm M1911 offers all of the shootability that is expected of the platform, but with the increased ammunition capacity and decreased recoil associated with the 9 mm Luger.

Also like the original, the Valkyrie Commander is built onto a lightweight aluminum frame, bringing the total weight of the pistol to only 30.7 ozs. Fans of the M1911 will find the handgun’s internals to be familiar, as dissembling the Valkyrie reveals a traditional removable barrel bushing and recoil spring plug assembly. The 4.25″ linked, stainless steel bull barrel features a fully supported chamber, a polished integral feed ramp and slight beveling to its crown that really gives the muzzle of the gun a clean appearance. Spent cases are pulled from the chamber using an internal extractor and are expelled from the gun by a frame-mounted ejector.

Cutouts in the frame help the user to reach the gun’s solid, sliding trigger. Reflecting the Series 70 design, the Valkyrie Commander lacks a passive firing pin safety mechanism, contributing to the gun’s crisp, light, 4-lb. trigger break. A rowel-style hammer is paired with an extended beavertail grip safety and a flat mainspring housing. Textured Slim-line G-10 stocks help the Dan Wesson Valkyrie sit very comfortably in the hand and provide ample purchase to help control the gun under recoil. Right-handed shooters will find an extended frame-mounted thumb safety on the left side of the pistol, but left-handed users are out of luck.

The fit and finish on the Valkyrie Commander is excellent, as we’d expect from a gun in this price range. The frontstrap is nicely checkered at 25 lines per inch, and the magazine well is beveled to assist the shooter during reloading. Perhaps some of the nicest cosmetic features of the gun are the High Power-style slide cuts near the front which, while very attractive, are also functional. They aid the shooter in establishing a positive grip when press-checking a gun’s slide to confirm the chamber’s status before carry or duty.

Make no mistake; self-defense is exactly the role for which this gun is designed. Its serious intentions are given away by the tritium night sights, which use a vertically stacked, two-dot arrangement—sometimes called “straight eight”—to avoid the visual confusion that often accompanies three-dot night sights. It’s a simple, intuitive system. In normal light, the pistol is aimed like any other, placing the front dot into the rear notch; in low light, the two dots are simply stacked on top of each other.

At the range, our goal was to evaluate the pistol’s suitability for personal defense. Weighing in at just less than 31 ozs. with an empty magazine, the Valkyrie Commander meets the first goal of a carry gun—it is easy to carry. Lighter and shorter than a traditional M1911, yet slimmer than a Glock 19, the Valkyrie conceals easily under an untucked polo shirt. To evaluate the gun’s performance for self-defense, we subjected it to a variety of defensive shooting drills, including failure to stop, Bill Drills and others. During all the tests with multiple types of ammunition, the Valkyrie fed and ejected flawlessly. The gun ships with two, nine-round-capacity Metalform magazines.

–
The Valkyrie proved easy to shoot as well. Talented shooters were able to post consistent Bill Drill times in the low 2.00 second range, with a couple of runs in the high 1.90s. The short slide and light frame give the gun a quick recoil impulse—the slide cycles quickly and the gun is back on target. It was reliable, easy to shoot and, best of all, it was extremely accurate. Five-shot groups with Hornady Critical Defense were all less than 2″ at 25 yds., and while full metal jacket ammunition didn’t fare quite as well, no load shot over 4″.

At $2,012, the Dan Wesson Valkyrie Commander sits solidly in the price range of guns from well-known semi-custom M1911 manufacturers. Some may balk at that, but they should understand that the Valkyrie belongs at that price level. This is no entry-level M1911; the fit and finish are what you’d expect in this price range, and so is the performance. It is accurate, easy to shoot and, most importantly for a carry gun, reliable. 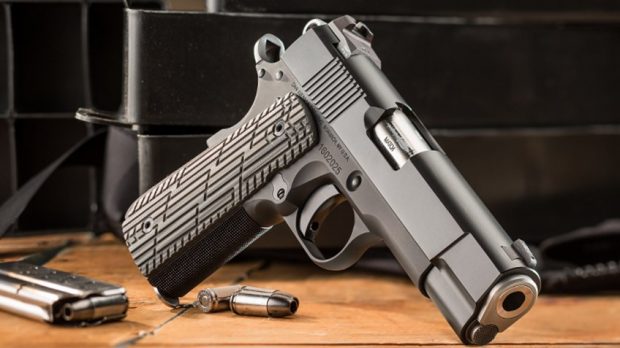