At his recent concert in Baltimore, Bruce Springsteen featured the nonprofit Hero Dogs, which trains and raises service dogs free of charge for veterans.

The group is located in Brookeville, Md., and aims to “improve quality of life for our nation’s heroes by raising, training, and placing service dogs and other highly skilled canines, free of charge with lifetime support of the partnerships.”

Springsteen has included the organization at his concerts in Baltimore Sept. 1 and Washington, D.C. April 20. Hero Dogs brought a few of its dog “ambassadors” to the concerts to meet and educate fans on its mission.

Springsteen has had a history of incorporating philanthropy into his career; he hosted the Concert for Valor in 2014 benefiting U.S. military veterans, and is involved in Stand Up For Heroes. At his shows in Chicago on Aug. 28 and in New Jersey on Aug. 30 there were representatives from local food banks when the fans walked in. He is known for contributing to local causes in his home state of New Jersey, specifically Asbury Park. 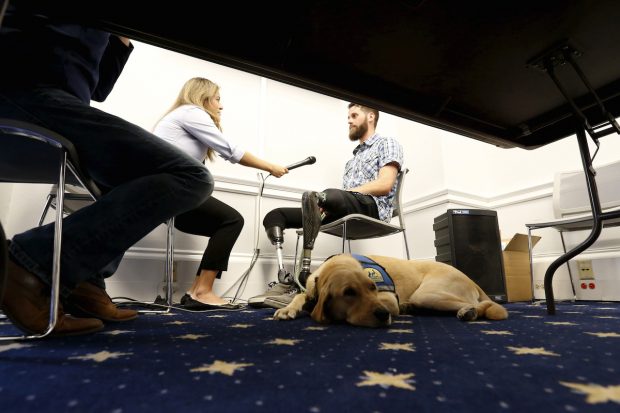 Hero Dogs caters to veterans with multiple disabilities, such as mobility challenges, hearing loss, mental health conditions or the effects of illness. The dogs can open and close drawers and cabinets, operate light switches, alert owners to sounds such as the doorbell or their owner’s name being called, as well as providing support physically.

They also retrieve items, know to press the automatic door button, wake their owners if they have nightmares, and can find help during emergencies. These dogs are the best of the best, and given the magnitude of the responsibility and skills needed for these animals, some don’t graduate from training.

These dogs can still be placed with veterans as therapy dogs, or are sent to other fields like search and rescue or detection. Whatever their duty is, these dogs get two paws up for their contribution to U.S. veterans.

To give back, see Hero Dogs’ donation page.