The U.S. Court of Appeals for the District of Columbia Circuit Tuesday morning heard oral arguments for a race and age discrimination lawsuit — complete with allegations of racial harassment and even an employee wearing a KKK belt buckle to work — against a certain newspaper that these days devotes a great deal of time and energy to depicting Donald Trump as racially noxious. That same paper, for no other apparent purpose than showing the American justice system is irredeemably racist, just published a huge Sunday front-page article, with no significant new developments or statements from public officials or anything the slightest bit newsworthy, on the 1941 unsolved murder and lynching of a black man at military base.

But when plaintiff David “Dave” DeJesus, arrived at court with his wife only one reporter was there waiting for him. 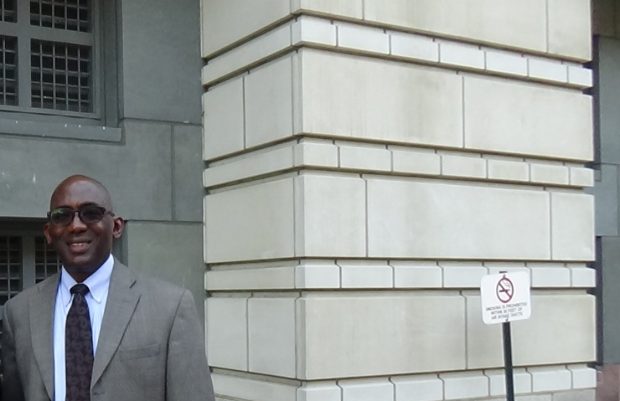 DeJesus laughed heartily at a joke about Post media reporter Erik Wemple and then discussed the perverse ironies of the media cover-up, citing the WaPo front-page lynching story. Plus, the abject cruelty of his white WaPo overlords. But he did it all with good humor, optimism, abiding faith and an obvious belief in the goodness of the American people and U.S. justice system. You don’t hear that kind of stuff very often from often from black commentators and hosts on MSNBC.

DeJesus and his wife both chuckled when I suggested the plain reality was that since they didn’t get stopped for “driving while black” on the way to court it was a safe bet nobody in the mainstream media would cover the case. In fact, just days earlier president Phil Griffin, hosts Rachel Maddow and Joy-Ann Reid did not even extend him the courtesy of a reply when he sought coverage. Washington Post reporter Wesley Lowery, who knows very well DeJesus is seeking his support, has refused for 18 months to speak on his behalf.

Noting his self-description as the Washington Post’s Invisible Man, I asked DeJesus what it felt like to arrive at court in these circumstances. He had some very kind words for a certain publication that Lowery, during a recent nearly three-hour phone conversation (more on that later), repeatedly insisted is just a “racist rag” and fancypants TPM founder Josh Marshall, who also refuses to cover the WaPo lawsuit, says is indistinguishable from Breitbart.

“I still feel that way, Evan,” he explained. “But you know what. I had a wonderful email from my sister who read your story and that meant the world to me.”

Recalling the abuse he suffered at the hands of police as a young black man in Chicago and his own early career days trying to make it in a white-dominated advertising industry, he cast the lawsuit as the latest part of a long trajectory. “I am about black empowerment.”

DeJesus, 63, noted that he even enjoyed the Black Panthers’ famous free breakfasts. Laughing, he said, the food was great but there was “no bacon because they didn’t like pigs.”

Referring to Al Sharpton’s refusal to meet with him and entreaties to longtime NAACP Washington office head Hillary Shelton that fell on deaf ears, I asked what message he had for black men who feel they have suffered discrimination but can’t enlist powerful allies for help. “I say speak out. I wish they would write to me.”

Despite everything he remained optimistic. “The American people always make the right choices. The light always invades the darkness. I know at some point Justice will be served. It’s just a matter of when.”

His case was assigned, with two others, to a three-judge panel that convened at 9:30 a.m. in a fifth-floor courtroom.

What happened at the hearing? I’m just going to let all those slothful reporters in cahoots with the Washington Post find out for themselves. Go ahead, guys. How do you make an objective decision not to cover a major court hearing if you don’t even know what occurred?

For all you know, Judge Janice Rogers Brown, who is black and arguably the circuit’s most conservative jurist, angrily called the Washington Post liberal racist hypocrites. Maybe, another judge on the panel — go get his name yourself — who is also black said the treatment of DeJesus was reminiscent of how his great-grandfather got lynched in Birmingham, Ala.?

Just how can Politico and Huffington Post and their fellow travelers possibly defend ignoring a hearing on the Washington Post lawsuit in a Washington federal appeals court?

Last year, Wemple told Washington Examiner reporter Eddie Scarry that he ignored the Ed Schultz district court trial because The Daily Caller did a good job covering it and he had nothing to add.

Really, Wemple? You “add” something to every single thing you write about every single day? Well, now you don’t have that excuse. Dylan Byers told Scarry he didn’t find the trial interesting. The possible perjury by MSNBC president Phil Griffin that emerged during the trial is not interesting? Well, now Dylan, you don’t have that same excuse for this case. And neither does Wemple.

Actually, all kinds of “interesting” things happened at the hearing.

The interplay between Judge Rogers Brown and the assembled lawyers was quite fascinating, contradicting the Democratic and media line that she is a rigid ideologue. OK. Spoiler alert. She didn’t ream into the Washington Post for liberal hypocrisy. Unlike Ruth Bader Ginsburg’s recent salvo against Trump, she would not embarrass her colleagues to score cheap political points.

But, hey, go call her clerks and find out what happened.

And talk to DeJesus’s lawyers, 85-year-old Mayer “Mike” Morganroth and his daughter Cherie. They won’t comment on the proceedings. But the senior Morganroth has represented a slew of famous clients, including the first black mayor of Detroit.

You love stories about women in the workplace? Go ask Cherie what it is like to be a woman lawyer working for and with her father. How does she navigate these tricky waters? Or maybe they are not so tricky? And gender is not as big an issue in the workplace as you all presume?

Aren’t you all very sensitive about ageism? Morganroth still working at his age is another interesting story. Note: since Ed Schultz’s lawyers last year convened an emergency court hearing to pretend I was secretly working in cahoots with the plaintiff let me just say, to save Jeff Bezos additional legal fees, these story lines are entirely my idea.

Regardless, what transposed after the hearing was also fascinating and completely contradicts the standard liberal narrative that powerful whites in this country can discriminate against blacks in this country with impunity.

Wearing a business suit with a tie and carrying two steno pads, I walked up to Washington Post general counsel Jay Kennedy, who signed off on the dismissal of DeJesus and refuses to discipline the white advertising vice president who, according to a sworn affidavit for the lawsuit, enjoys making racist jokes about black female subordinates. My most recent online picture is from 2004 and I don’t think I even identified myself before extending my hand.

But Kennedy, who Lowery recently bragged is “my lawyer,” clearly knew this was an ambush interview. Unlike almost everybody else in similar circumstances he didn’t run away. Or even flinch. He just smiled warmly and shook hands.

I asked him if he wanted to go over to where Dave was sitting and “shake his hand.”

He refused, claiming, falsely, he had already shaken his hand. I pressed him again but he stonewalled with poise.

Further prodding would have been fruitless. I could have said, “Hey, Jay, I thought the Washington Post is big on racial reconciliation.”

But he wouldn’t have responded. Instead, I just stuck to the undisputed facts. “Why haven’t you disciplined Ethan Selzer for making racist jokes?”

Wow. That changed the dynamics quickly. Visibly shaken, he turned around and scurried out of the courtroom.

What’s he so scared of? Lawyers normally have an answer for everything — witness the previous exchange. Well, almost everything.

Ethan Selzer, according to the sworn affidavit by a black woman who claims he forced her out in the course of the deliberate purge of older blacks like DeJesus, made racist jokes about her own husband and said another black female employee should clean the kitchen. But Selzer, who approved the firing of DeJesus, was never disciplined by Kennedy for his racially abusive treatment of  black women. He remains a top Washington Post advertising department official.

From the Arisha Hawkins affidavit:

“Selzer made offensive and racially inappropriate comments, used profanity and raised his voice at me. But his behavior was accepted and condoned by his co-workers and superiors as ‘that’s just Ethan being Ethan.'”

“Selzer was manipulative and conniving, and seemed to search for ways to get rid of minority employees he did not ‘like.'”

“I heard of other racially offensive or insensitive comments made by Selzer, such as an insulting comment that Carlita (African-American  female employee from the Ad Operational team) be responsible for cleaning the department kitchen.”

“Ron Ultrich, a white sales manager, made a a racially offensive comment to me about my primarily African-American team,” saying the sales representatives could not find employment anywhere but Wal-Mart or Giant if not at the Post.

The reality is that contrary to what the Washington Post generally leads people to believe blacks can get justice and redress in this country when they suffer egregious acts of discrimination — even when the bad actors have lots of friends in high places.

DeJesus understands this because he has faith in the American people.

That’s probably why, unlike Wesley Lowery, he doesn’t go around acting like an angry black man. Not even Tuesday morning when Lowery’s lawyer, in cahoots with some very powerful and esteemed journalists, tried extra hard to pretend he doesn’t exist.