Cowards who refuse to identify themselves have sprinkled the campus of Michigan State University with flyers publicly shaming a professor for supporting Republican presidential nominee Donald Trump.

Emblazoned on each flyer are the words: “Meet Your Professor!” followed by a photograph showing Guzman, sitting behind Trump at rally outside of Lansing last month. 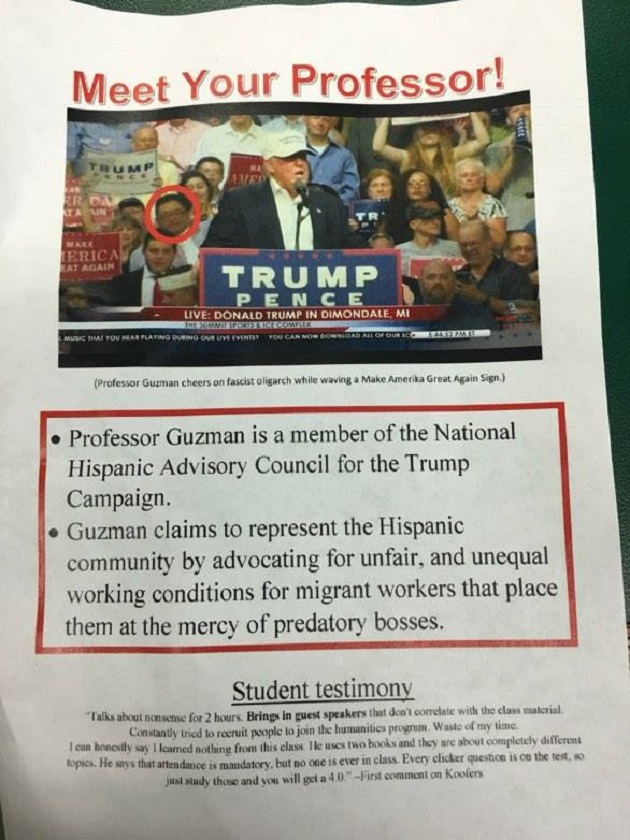 The creators of the flyers helpfully identify Guzman’s face in the crowd behind Trump with a thick, bold, red circle.

Below the photo, the text of the flyer reads (verbatim): “Professor Guzman cheers on fascist oligarch waving a Make Amerika Great Again Sign.”

Next, a pair of bullet points in a red box inform flyer viewers that “Professor Guzman is a member of the National Hispanic Advisory Council for the Trump Campaign” and that “Guzman claims to represent the Hispanic community by advocating for unfair, and unequal working conditions for migrant workers that place them at the mercy of predatory bosses.”

(The pointless comma is quoted verbatim.)

At the bottom of the flyer is “Student testimony,” which is a quote from a single student review of Guzman — at a website called Koofers.

The student review complains that Guzman “brings in guest speakers” — that part is in bold — and “constantly tried to recruit people to join the humanities program.” “Waste of my time,” the student critic gripes.

Guzman, a longtime Republican, said he thinks the public shaming because of his Hispanic origin and his support for Trump is unfair.

Previously, in a statement obtained by the website, Guzman said he supports Trump enthusiastically.

“It is an honor to be a part of Mr. Trump’s National Hispanic Advisory Committee,” Guzman said. “I am energized and more convinced than ever that Donald Trump is the leader to move our nation and all our communities in the right direction.”

Guzman, a former interim director of Michigan State’s Chicano and Latino Studies program, discussed his affiliation with the GOP and his support for Trump in an August interview with City Pulse, a Lansing website.

“I can’t go through all the gamut of issues, but I will say that broadly Mr. Trump appeals to working people,” Guzman said in the interview.

“I know there’s strong emotions out there, but I hope people can look past emotions and think about specifics,” Guzman also said. “And also remember in this country we are free to choose our political candidates.”

Michigan State is famous, of course, for blatantly discriminating against male students by maintaining a taxpayer-funded women’s study lounge in its main student union — in which male students could not trespass. (RELATED: 2016: Michigan State University Faces Civil Rights Complaint Over WOMEN-ONLY Lounge In Student Union)

1
'Closer To Animals': Nick Cannon Goes On Racist, Anti-Semitic Rant, Says 'White People' And Jewish People Are 'The True Savages'
US
2
How Has This Viral COVID-19 Story Hit The New York Times With Zero Corroboration?
Media
3
Geraldo Rivera Sees A Potential 'Clear Path To Reelection' For Trump
Media
4
NBC News Spent Weeks Reporting On A Contributor's Journey Battling Coronavirus – But Now He Says He Never Had It
Media
5
'You Took My Son. Go To Hell': Family Of Murdered 1-Year-Old Baby Speaks Out Against Killers
US