Thousands of coal miners gathered in force to protest energy policies and rally for benefits lost to recent bankruptcies in front of the Capitol Building Thursday, demanding Congress act before the year is out.

“The reason why these union coal miners have their healthcare and pensions in jeopardy today is because of senseless and heartless policies from the Obama Administration and the Environmental Protection Agency,” Rep. Andy Barr, a Republican from Kentucky who spoke at the rally, told The Daily Caller News Foundation. “He declared a war on coal when he was a candidate and he delivered and 10,000 of my fellow Kentuckians no longer have paychecks. These men and woman worked their tails off for decades underground in a tough environment and what they did was heroic work.”

Members of United Mine Workers of America (UMWA) are pushing representatives in the Senate to pass a bill to guarantee healthcare and retirement benefits for roughly 23,000 coal miners and their families, and nearly 120,000 current coal workers. Roughly 94 percent of coal worker pensions were funded before the 2008 recession, however many companies have since gone bankrupt due to market conditions and the increasingly harsh regulations from the EPA and Congress on the industry. 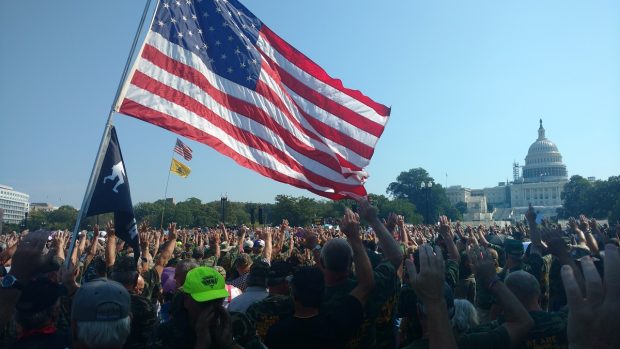 The bill stalled in the Senate more than a year ago due to concerns over the price, which is estimated at $3 billion. Many members of Congress view it as a bailout for multi-employer pension funds that would set a dangerous precedent for other pension funds. Supporters point out the funds already exist from a tax on coal companies, and simply need to be directed to support pensions.

“There are a lot of pensions funds that are in trouble, the difference here is that there’s a tax on every ton of coal and its divided into two separate pots,” Jamie Horwitz, media consultant for UMWA, told TheDCNF. “There is money set aside for land reclamation, but there is also money that is there to fund miner’s pensions where their companies went bankrupt.”

The current law only allows for benefits to be paid to employees from coal companies that went bankrupt in the 1990s, well before the coal industry began to suffer. Less than 50 of the roughly 150 coal mines operating in West Virginia in 2008 still remain in use.

“The structure of the pension is suffering an added burden that other pensions don’t have because more than 50 companies have gone bankrupt in the last two years,” Horwitz said. “Essentially what this bill does, is it takes this already existing fund, which is in surplus, and it just moves a date. It says that if your company went bankrupt at this time, you have access to your benefits.” 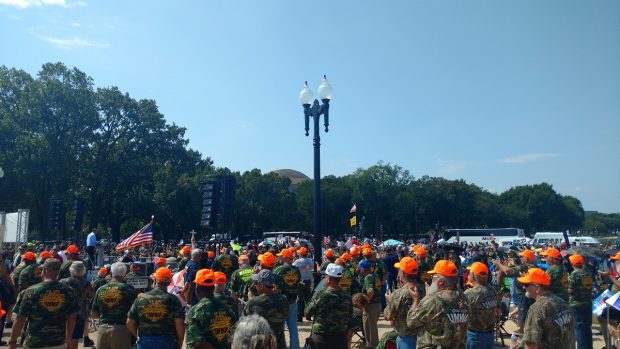 The Senate Finance Committee will consider the issue next week, and supporters are hopeful Congress can approve the funds by the end of the year. Roughly 23,000 workers will lose their benefits at the end of the year if the effort fails. The burden will then fall to the Pension Benefit Guaranty Corporation (PBGC), the second biggest multi-employer fund, which is already facing solvency problems.

“I’m optimistic about next week,” Sen. Rob Portman, a Republican from Ohio who spoke at the rally, told TheDCNF. “One of the points I make with my Republican colleagues is the impact this would have on PBGC if we don’t fix it. It’d be a huge liability. The idea is to try and come up with a way to avoid that so I think this is the most fiscally responsible route to take.”

Despite bipartisan backing, the bill is still six Republican votes shy in the Senate. The issue is not political for some coal workers who say they just want the retirement benefits they were promised. Supporters stress the bill does not add any new financial burden on taxpayers, but simply ensures the pensions through funds that already exist.

“We retirees in the coal industry helped make this country what it is,” said Buddy Davis, a retired coal worker from West Virginia. “They just have to pass a bill so we have access to benefits we paid into every year.”