Hillary Clinton attacked Matt Lauer in a fundraising email the day after he moderated a forum between her and Donald Trump.

In an email sent out to supporters on Thursday, the Democratic nominee said Lauer failed to fact check what her opponent said during the Commander-in-Chief forum on NBC Wednesday night. (RELATED: Here’s How Tonight’s Presidential Forum Between Trump And Clinton Will Work)

“Not only did the moderator, Matt Lauer, fail to fact-check Trump — he then kept the conversation moving,” the email read. “The worst part is, there’s nothing new about this happening.”

“We all know that Trump lies a lot. And we all know that many outlets in the press apparently lack the wherewithall to call him out — and help voters understand that what they’re hearing from Trump isn’t normal political talk, but an unprecedented descent into unqualified nonsense from a major-party presidential nominee.” 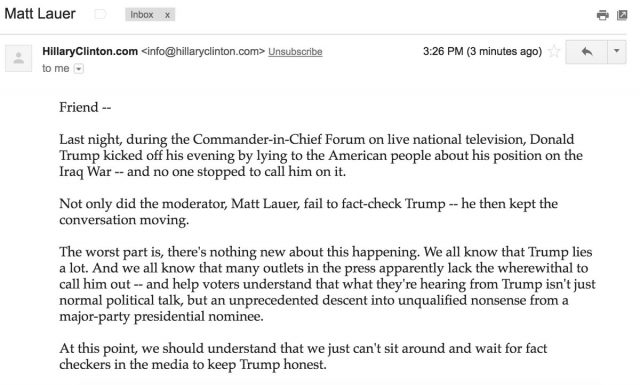 Lauer fielded a wave of criticism after he opened up the evening by asking Clinton about her email use while she was secretary of state.

LAUER: “So judgment is a key.”

LAUER: “The word ‘judgment’ has been used a lot around you, Secretary Clinton, over the last year-and-a-half, and in particular concerning your use of your personal e-mail and server to communicate while you were secretary of state. You’ve said it’s a mistake.”

LAUER: “You said you made not the best choice. You were communicating on highly sensitive topics. Why wasn’t it more than a mistake? Why wasn’t it disqualifying, if you want to be commander-in- chief?”

CLINTON: “Well, Matt, first of all, as I have said repeatedly, it was a mistake to have a personal account. I would certainly not do it again. I make no excuses for it. It was something that should not have been done.

But the real question is the handling of classified material, which is I think what the implication of your question was. And for all the viewers watching you tonight, I have a lot of experience dealing with classified material, starting when I was on the Senate Armed Services Committee going into the four years as secretary of state. Classified material has a header which says “top secret,” “secret,” “confidential.” Nothing — and I will repeat this, and this is verified in the report by the Department of Justice — none of the e-mails sent or received by me had such a header.” 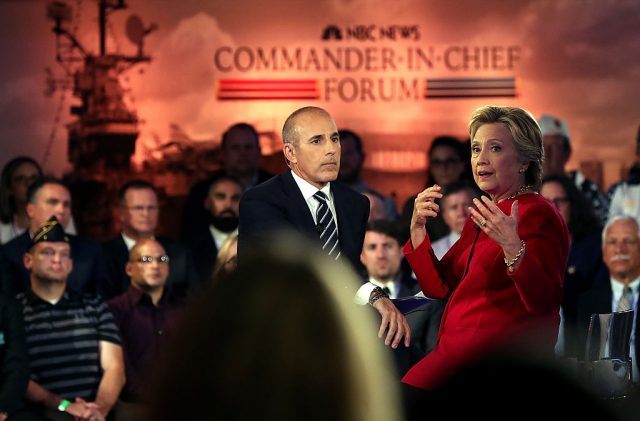 It’s worth noting that Lauer is listed as a “notable past member” on the Clinton Global Initiative’s website — along with Anderson Cooper and Katie Couric.

In the past, a Clinton Foundation official has said that the journalists who are part of the foundation were never asked to pay the $20,000 member fee.

“In fact, in 2012, we reclassified members of the media who participate as ‘guests’ rather than ‘members’ to acknowledge this distinction,” the official has said. (RELATED: Matt Lauer Will Moderate The First Forum Between Donald Trump And Hillary Clinton)