A campus Republican club at Sewanee: The University of the South was suspended after it put up 9/11 memorial posters that administrators said would arouse hatred towards Muslims.

The posters in question simply show photos of eight different acts of violence by Islamic radials (such as 9/11, the USS Cole attack, and the Orlando nightclub massacre) along with the words “Never Forget” in the middle. The poster was created by the conservative Young America’s Foundation (YAF), and has been used by student groups at several universities. 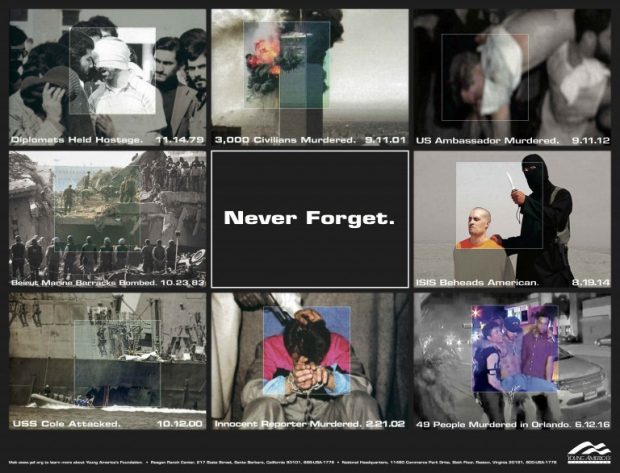 Sewanee College Republicans President Amir Kamrani told The Daily Caller News Foundation his group requested permission to put up the posters, but was denied. Kamrani said a member of the group was told by Assistant Dean of Students Hagi Bradley the poster was unacceptable because it “invokes hate towards Muslims,” a claim Kamrani dismissed. (RELATED: Prof Rips Down 9/11 Posters As College Blocks Event)

“It is about Islamic extremism [and] terrorism,” he told TheDCNF. “With 9/11, it’s no secret al-Qaida is an Islamic extremist organization. But [the poster] did not say anything about Muslims, just the terrorist activities committed by Muslim extremists. And that’s what we’re fighting against today.”

Notably, the Sewanee Republicans put up a previous iteration of the poster (using the same design but with only six incidents instead of eight) in 2015 without incident.

Kamrani reached out to Bradley requesting a more detailed explanation of the rejection, but received no reply other than being told the matter had been forwarded to Dean of Students W. Marichal Gentry.

The Sewanee Republicans received no additional word two days later when the 9/11 anniversary rolled around, and decided to push forward and put up two of the posters despite lack of approval.

This proved to be a fatal misstep. Late Sunday night, the group received an email from Bradley requesting that Kamrani meet with him. On Monday, Kamrani did so, and was informed the group had been indefinitely suspended for misconduct.

The suspension means the College Republicans have no access to university funds and cannot schedule or host official events.

In the past, Sewanee has shown strong tolerance for allowing potentially offensive material in public spaces. In 2015, for instance, the school approved the erection of a giant golden clitoris statue in the main library.

When reached for comment, Sewanee replied by defending the suspension, saying the Republicans had clearly violated school rules and potentially menaced other students.

Nevertheless, the statement also said the Republican club had been un-suspended pending a review of its actions.

(UPDATE (9/14/2015): Several members of the Sewanee College Republicans contacted The Daily Caller News Foundation Wednesday to dispute Kamrani’s leadership of the group.
According to the group’s secretary, Abbey Shockley, Kamrani’s tenure as president officially ended last April, but he had refused to hold required officer elections. Shockley said Kamrani obtained and put up the posters on his own, without the collaboration of other group members. Only after the crisis caused by the group’s suspension, Shockley said, did other members of the group hold an emergency meeting to select new officers and push Kamrani aside.
In a letter sent to TheDCNF and addressed to the Sewanee community, the four newly-elected officers denounced the YAF posters as “crude and shocking” and said school officials were justified in attempting to block their use. They also said the group’s suspension had been lifted because they had demonstrated to Sewanee officials that Kamrani did not represent them.
Kamrani, meanwhile, has “voluntarily” left the group, the letter said.)
Follow Blake on Twitter