On Monday, the touchy, lefty NYT columnist accused the general public of “subconscious racism” because no one would sit next to him on the pretty pricey Acela. 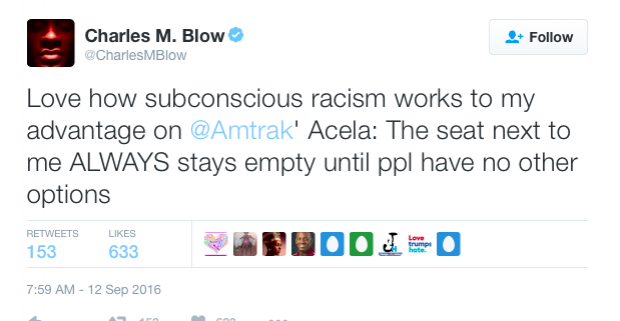 Reaction to his assumption was largely in his favor, with many Twitter followers saying they’d love to yak his ear off on a train. Over and over (and over) again, they called him incredibly smart, famous and good looking. One woman even admitted to having a crush on him. Another said she’d be too nervous to sit next to him because she’s such a “fangirl.”

Still another woman wondered if he was man spreading — or, in this case, perhaps that should be labeled blow spreading.

But my favorite reaction came from “Mike” who had a more reasoned response.

And “Allen” who wanted to know this:

“What cologne are you using?”

A Washington journalist told The Mirror that Blow is missing the most rational explanation of all.

“He secretes douche,” the individual wrote in an email. “No one wants to sit next to him because he looks like an asshole. And they’re correct.”

My colleague, phone enthusiast and Washington Gadfly Evan Gahr wrote The Mirror to say he, too, gets discriminated against on the train — maybe because he’s Jewish but more likely because he’s a slob.

“Is the Times paying for his trip on the Acela?” he asked. “That’s pretty good for an oppressed black man. On the regular Amtrak most people avoid sitting next to me. Is that because they are anti-Semitic? And they’re scared I might scratch them with my horns? Or is it because I am big and usually slob up the empty seat next to me within minutes anyway.”

“Subconscious racism is only one possibility for empty seat next to you. Think hard and I’ll bet you can come up w more,” wrote Steven Murray, a musician and writer.

Deplorable Tyreese (a.k.a. @niggatyreese) gave him a talking to.

“Laughing at punk @CharlesMBlow, complaining about something he should be grateful for. Stretch out & relax. @Amtrak,” he wrote.