Just in time for the 2016 election, San Francisco PBS affiliate KQED is offering a Common Core-ready lesson plan designed for public school teachers who want to indoctrinate students with a love for open borders and a deep suspicion of anyone who favors the immigration restrictions proposed by Republican presidential nominee Donald Trump.

The lesson plan — which comes complete with “safe space” suggestions — is offered by way of a section of the taxpayer-funded television station’s website called “The Lowdown” (“connecting newsroom to classroom”).

The lesson, released this week, centers around a graphic comic entitled “Fear of Foreigners: A History of Nativism in America.” (Click on the images for a fuller view.)

Here’s the first of the graphic comic’s 12 pages: 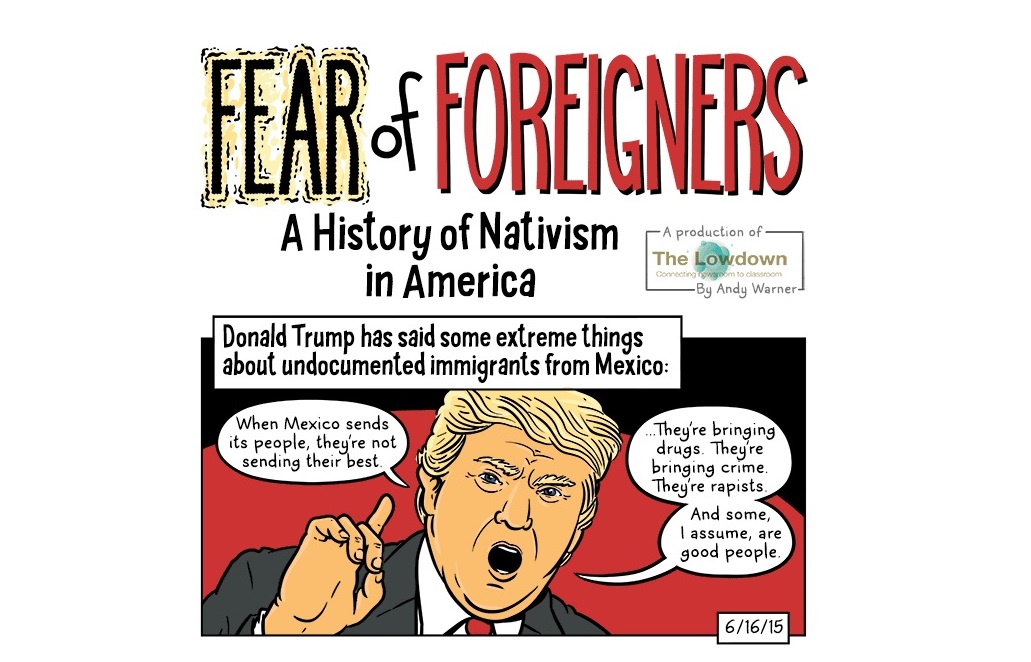 “Students read and annotate the graphic,” the lesson plan instructs. “Individually or in groups, students identify the historical factors that led to nativism by underlining or highlight evidence. Some factors are stated explicitly such as economic hardship and war. Some are implicit and require closer reading.”

The second graphic in the comic shows Trump “calling for a total and complete shutdown of Muslims entering the United States until our country’s representatives can figure out what is going on.”

A bold, black-and-white box then informs students that “some Americans find his rhetoric alarming, but it follows a long tradition of anti-immigrant discourse.”

The next comic graphic informs students that “we still sometimes have a tendency to blame newcomers for national problems, especially in response to tough economic times and threats to national security.”

Subsequent graphics show Ben Franklin warning of the dangers of German immigrants; the “Know-Nothings” displaying “anti-Catholic, anti-immigrant sentiment”; an illustration of the Chinese Exclusion Act of 1882; Ku Klux Klan members in front of a burning cross and hating Italian immigrants; a woman in front of a Ford dealership deeply concerned about Jewish immigration to the United States; “repatriation” of Mexicans during the Great Depression; a Japanese internment camp during World War II; and recent efforts in California and Arizona to curb illegal immigration.

While the comic graphics are pretty slanted on the whole, the one about Japanese internment particularly stands out for its blatant inaccuracy. The contention that “the majority” of Japanese-Americans had been citizens for “generations” is a ludicrously false claim. The graphic also stands out for its omissions. At the onset of World War II, Americans came to believe that Japanese-Americans and Japanese immigrants could not be trusted because at least two Japanese immigrants immediately attempted helped a Japanese pilot take hostages after he had crashed on a remote Hawaiian island just after Pearl Harbor.

A second bold, black-and-white box instructs students that “it’s not surprising that Mexican immigrants and Muslim communities are the targets of this recent bout of nativism” because “countless Americans still struggle economically and the nation remains on edge after recent ISIS-inspired attacks.”

The last comic graphic features a “Kiss Me I’m Irish” mug and all but hits students over the head with the political message of the lesson. “But looking back at the many times in the nation’s history when nativism reared its head, it’s worth remembering that the anti-immigrant fervor of the moment usually passes,” the comic instructs. “And eventually those targeted newcomers are woven into the patchwork quilt that makes America what it is.”

Among the lesson’s “discussion questions” is this gem: “Is nativism inherently wrong? If so, how can ordinary citizens stand up against it?”

The lesson encourages teachers to place students in “circle chats,” “small group discussions” and “think pairs” — all of which “provide a safer space for students to practice speaking and listening, and also boost participation during whole-class discussions.”

The “key vocabulary” terms for the lesson are: “nativism,” “discourse,” “repeal, “scapegoat” and “sentiment.”

The grade level for which the lesson is intended is not immediately clear.