The New York Times reported with a heavy heart yesterday that nobody wants to buy “Stronger Together,” Hillary Clinton and Tim Kaine’s new policy book. According to Nielsen BookScan numbers, the book sold under 3,000 copies in the first week, which, to put it lightly, is very bad. As the Times comments, “the sales figure…firmly makes the book what the publishing industry would consider a flop.”

It seems that even those who bought the book are by no means fans. Eighty-two percent of those who’ve rated it on Amazon have given it one star. When averaging all reviews, “Stronger Together” has an aggregate score of 1.6 stars. Not good.

Even worse for Hillary, the 1.6-star score might not even be an accurate representation of what people really think. Several of those who gave it five stars don’t seem to like it at all.

Take JudyBooty1964, who wrote, “I’d write a bad review but I don’t want to die in a car crash or commit suicide by shooting myself in the head twice.”

Or bestachess, who wrote, “This is a great book. The chapters on ‘How to screw up everything you touch with hubris’ ‘How to write the perfect doctor’s note’ and ‘D**ing bimbos at home’ were worth the price of admission.”

David Weaver even admits he didn’t read the book, but his 5-star review still count toward the average: “Only a Clinton would charge the American people to read her plans for the country should she be elected. I remember the day this book was released as Mrs. Clinton stood on the stage proudly waving her new masterpiece. “My partner and I have written a splendid plan for American and you can read it right her in our new book.” She makes me sick to my core and NO, I didn’t read the damn book. I refuse to give this money grubbing whore one dollar of my money. If she’s elected President I’m sure she’ll take my money anyway. Sickening.”

Good thing so few people have bought “Stronger Together.” Seems like anyone who shells out 11 bucks for the book is sure to be disappointed. 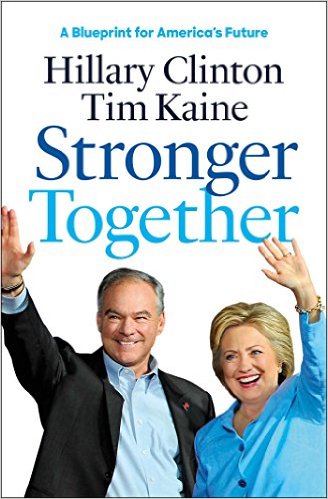 You don’t want to read this (Photo via Amazon)