To exact revenge for Donald Trump‘s shoddy treatment of the media Thursday and Friday, some TV reporters are finally giving the presidential hopeful a taste of his own medicine.

ABC campaign reporter John Santucci explained on Twitter, “Trump is taking the press pool on a tour of his opulent Washington, D.C. hotel – however there is no print reporter or no broadcast producer which is always standard.”

Another ABC journalist, Candace Smith, said she was physically restrained. 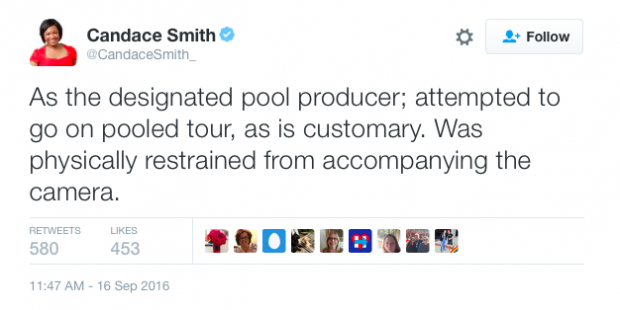 Maggie Haberman is a reporter for the New York Times. Ben Jacobs writes for the Guardian.

Many reporters expressed irritation about Trump’s dirty trick on the media Friday morning at his Washington hotel. He claimed he had something major to report. He waited until the very end to finally say that President Obama was born in the U.S.

Trump unknowingly turned Daily Mail‘s David Martosko into a piece of fruit. He wrote on Twitter, “Media area is at least 50 feet away from Trump’s podium today. If this is a ‘press conference,’ I’m an avocado.”

Others acknowledge that Trump essentially goosed them.

“Well, I was there. …I think objectively, the press corps got completely played,” said HuffPost‘s senior political editor Sam Stein on MSNBC’s Andrea Mitchell‘s program Friday. “We were told to show up for a major announcement. …Instead what we got was an infomercial for Trump’s hotel and testimonials from veterans about how great he was..He played the press corps for fools.”

Stein said he does not think Trump put the Obama birther issue behind him at all.

“He’s responsible for starting this whole thing and mainstreaming this idea,” added WaPo‘s Chris Cillizza, who also appeared on Mitchell’s show. “…You don’t get to just say everything’s fine. What changed his mind?” 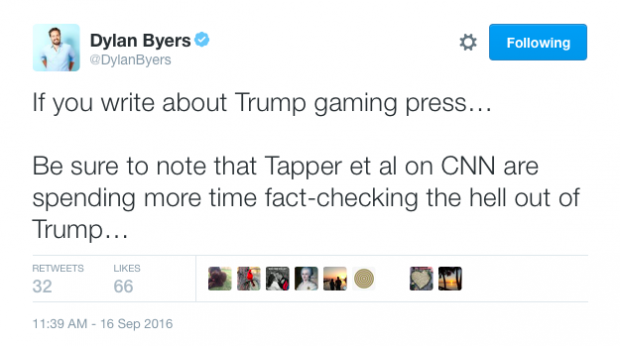 But pollster Frank Luntz admonished the media for its anger.

“Odd to see media outraged over Trump’s press conference this morning… Same media that gave him billions in free airtime over past 15 months,” he wrote on Twitter.

On Thursday night, members of the press tried to ask Trump to prolong his speech in New Hampshire because of a delayed flight.

He nipped that idea in the bud.

“I just heard the press is stuck on their airplane,” Trump said at his rally. “They can’t get here. I love it. So they’re trying to get here now. They’re going to be about 30 minutes late. They called us and said could you wait? I said absolutely not. Let’s get going, New Hampshire.”