Arkansas football coach Bret Bielema has a wild tale about how he met his wife Jen, and if you believe it I have some ocean front property in Nebraska to sell you.

“I always say ‘I have a good memory.’ I don’t know if I remember the opening line, but I remember the opening sequence. It was about eight years ago, I still had some game, brought some A-game. The thing I didn’t do or what I do. I was with some guys with Wisconsin, one of them might have had a [Wisconsin] shirt on. I didn’t. I told her I was an MBA history professor,” the former Wisconsin Badgers coach told Fox Sports Clay Travis. (SLIDESHOW: Get College Football Started Right With These Top 25 Ranked Cheerleaders) 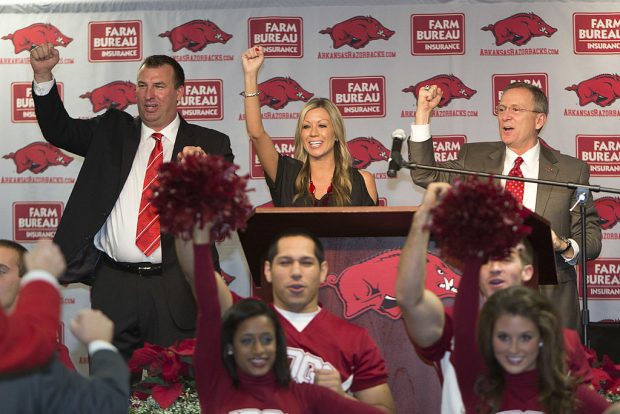 I’m not buying a single word and here’s why. Jen has done interviews about how the two met, and they don’t mesh well with Bielema’s memory. Jen claims the two met in Las Vegas when Bret was still the Badgers coach, but she didn’t know what he did for four months.

“I didn’t even know he played football or coached or anything until about four months after we met,” Jen told CBS affiliate Channel 3000 in Madison, Wis.

Jen also claimed she grew up in Wisconsin, but didn’t know who the Badgers head football coach was when they met. That may be the most ridiculous part of this whole story. Bielema was arguably the most famous person in Wisconsin in the time period they met. Only Packers quarterback Aaron Rodgers and Badgers basketball coach Bo Ryan were possibly more well known. 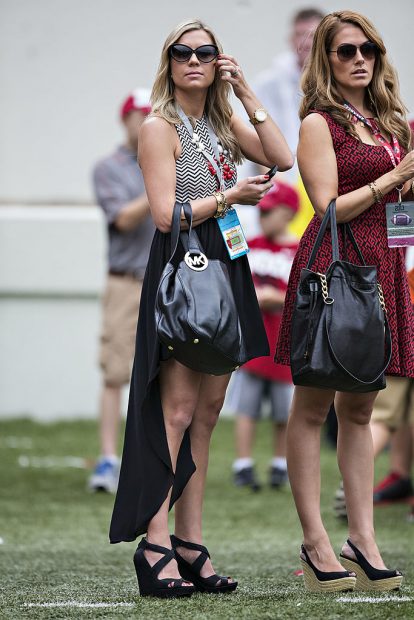 FAYETTEVILLE, AR – SEPTEMBER 28: Jen Bielema, wife of Head Coach Bret Bielema of the Arkansas Razorbacks on the sidelines before a game against the Texas A&M Aggies at Razorback Stadium on September 28, 2013 in Fayetteville, Arkansas. The Aggies defeated the Razorbacks 45-33. (Photo by Wesley Hitt/Getty Images)

And yet, she didn’t know who he was or what he did for four months? At no point did she think about a quick Google search on the guy she was spending time with after their meeting in Vegas? Compare that with Bielema’s account that he told her he was a history teacher when he met her.

The two accounts don’t go together. Bielema’s tenure at Arkansas has been a massive disappointment, so perhaps this story is an attempt to bolster his street credibility with the fans and boosters.

It’s also worth noting that I have called out the couple for their ridiculousness in the past, and it didn’t go over well. 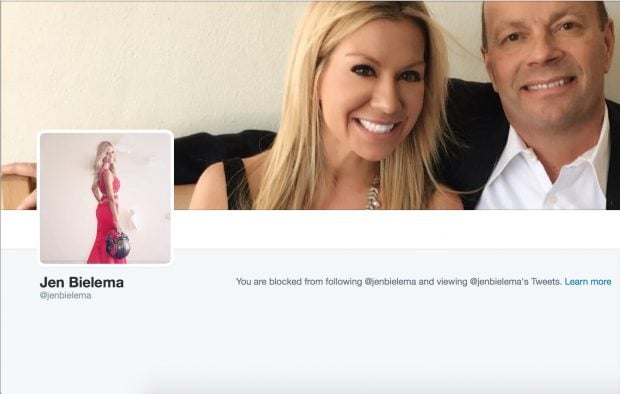 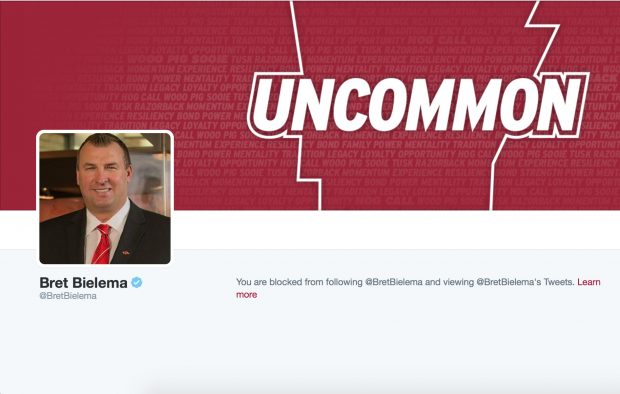 UPDATE: Jen Bielema is claiming that she never grew up in Wisconsin, despite the fact she clearly stated she lived in Oshkosh for her summers in previous interviews.

The ridiculous part of ur article is I never grew up in WI. Born/raised in FL for 25 yrs. Learn the facts or hush… https://t.co/1epmTfRvxV

UPDATE PART TWO: Jen is now admitting she did indeed spend time in Wisconsin, but claims it was only until the age of 14. A revelation not revealed in previous interviews.

And yes, I visited Oshkosh, WI most summers for 7-10 days till I was maybe 14 years old. It’s called vacation.