It’s time to set the record straight on my escalating feud with Arkansas football coach Bret Bielema and his hot wife Jen.

I wrote a brilliant piece titled, “I Don’t Believe A Single Part Of Bret Bielema’s Story About Meeting His Wife,” where I surgically dissected claims made by both Bret and Jen about how they met. I pieced together different clues over the course of years to find holes in the timeline leading up to the couple getting married.

Ironically, Jen herself has questioned Bret’s story about how they met.

Was nearly 9 yrs ago- I don’t remember that specifically but do remember a brief/vague school systems sort of reply. https://t.co/ngf7t9WN2d

However, it didn’t sit well with Bret’s blonde bombshell of a wife, and she fired off some tweets to let the world know she wasn’t a fan of my great work.

The ridiculous part of ur article is I never grew up in WI. Born/raised in FL for 25 yrs. Learn the facts or hush… https://t.co/1epmTfRvxV

And yes, I visited Oshkosh, WI most summers for 7-10 days till I was maybe 14 years old. It’s called vacation.

Next thing I knew #BielemaGate had blown up the internet. Arkansas fans came crawling out of the woodwork threatening me, telling me to kill myself and just being idiots in general. Southern websites were writing up the feud and people were quickly takin sides. It felt like a second civil war could be on the horizon. 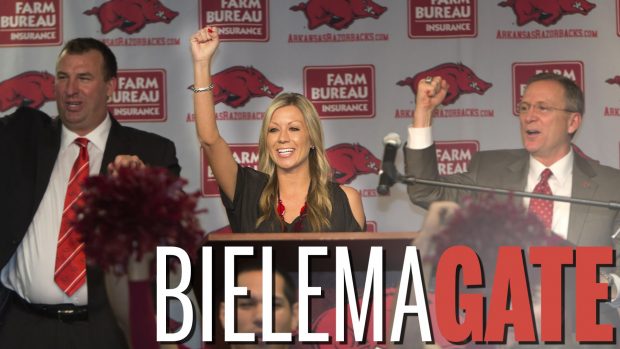 Now let me be perfectly clear, I stand by every word I wrote. I still absolutely believe there is no chance in hell you can be around somebody for months without knowing they’re one of the most famous people alive in sports. It’s just not plausible in a world cemented in reality.

I understand that we are at a crucial crossroads in this feud between two sides deeply rooted in their idea of the truth. As a Wisconsin Badger I have absolutely no grudges against Bielema and it was not the motivation for my investigation. Earlier today I went on Facebook Live to explain the situation.

I do not want another war between the dedicated football fans in the south and the men of the north who enjoy some cold beer and a great game on Saturday. In an attempt to veer off the path to inevitable destruction I am willing to extend a peace offering to the Bielemas.

I will give Jen and Bret both the chance to do interviews with The Daily Caller and explain their side of the story, and show me how I went wrong (if I did at all). I’m even willing to take things a step further and I will travel to Arkansas to interview Jen or Bret. This situation has now gotten bigger than anybody involved, and it’s time to end it before there is no turning back.

Am I hero for sacrificing so much to get to the truth and avoid a war? I’ll let the history books decide that.