#NotAllMuslims are terrorists, but Dahir Adan was. That’s the name of the terrorist who ran around a mall in Minnesota on Saturday, asking people if they were Muslim and then stabbing them. Nobody was killed, and that’s thanks to a civilian who put a stop to it by exercising his Second Amendment rights.

USPSA Shooter, 3-Gunner, and NRA-certified firearms instructor Jason Falconer has been identified as the man who shot and killed a 22-year-old Somali immigrant who went on a stabbing rampage inside a St. Cloud, (MN) Mall on Saturday…

Falconer is the president and owner of Tactical Advantage LLC, a shooting range and tactical training facility with a strong focus on arming concealed carriers. He’s also a former chief of the Albany (MN) police department, and he remains a part-time officer…

He’s a firearms instructor passionate about training concealed carriers and developing the best-possible, most-realistic training for his clients.

As Owens points out, most news outlets are omitting this part of Falconer’s bio. Weird, right? You’d think they’d want people to know that a terrorist was stopped by a highly trained NRA member. A good guy with a gun.

Fantastic news that he was taken alive. https://t.co/eOyiMCAKBW

We're also very very lucky that the attackers tried to use explosives rather than guns.

Terrorists are bad, you guys, but what we really need to do is get rid of all those guns…

In the case of Falconer and Adan, our moral, ethical, and intellectual betters in the media can’t blame the NRA like they usually do. A bad guy used a knife and an NRA member stopped him with an evil, evil gun, and that won’t do at all. So here’s what news outlets like CNN are focusing on instead: 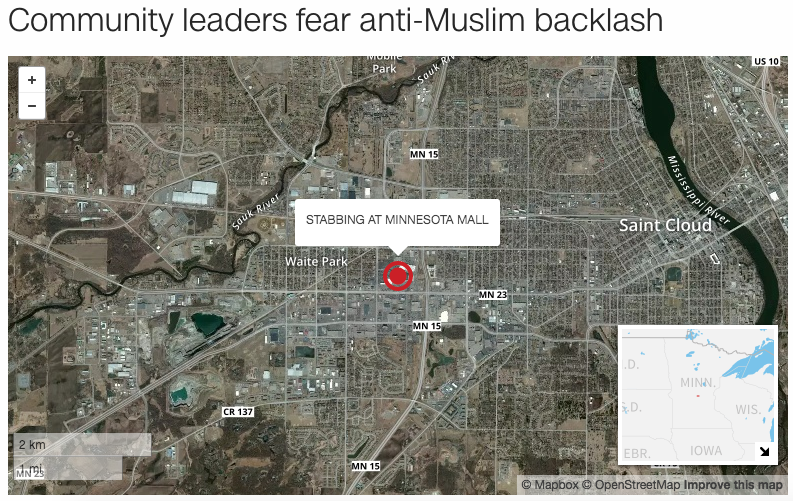 Well, they always do, don’t they? There’s always a “looming backlash” against Muslims after an Islamic terror attack, and yet it never comes.

Look, we get it. If you’re a Muslim in America, it’s astronomically unlikely that you’re a terrorist. But unless you’re caught in a terror attack, you’re not a victim either. The people who are attacked by terrorists are the victims. Feel sorry for yourself all you like, but the rest of us are more worried about them.

Anyway. Kudos to people like Jason Falconer, and NYPD Detective Brian O’Donnell, and anybody else who steps up when terrorists attack civilians. If our government can’t stop terrorists — and I’m doubtful they can, no matter who’s elected in November — I guess it’s up to us.

Josh Earnest, on ISIL: "This is an organization that is in retreat."

They fell back to New Jersey. https://t.co/F1SLpdfWhk