If you’re Jewish and covering the 2016 presidential election, chances are high that the word “kike” will come your way.

Take CNN Politics reporter Jeremy Diamond. He was told to go to Israel where he belongs.

That, or the oven. 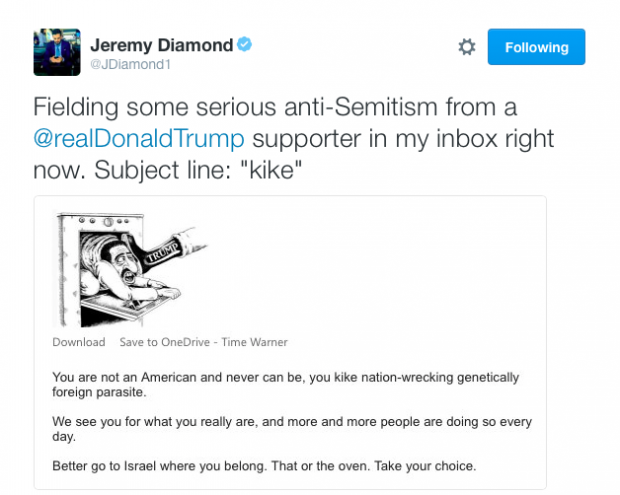 Newsweek senior writer Kurt Eichenwald, who is known to be something of an asshole in his behavior with other humans, has also been called the k-word. And he’s not even Jewish. He’s Episcopalian.

Just last week, he was called a variety of Jewish slurs. 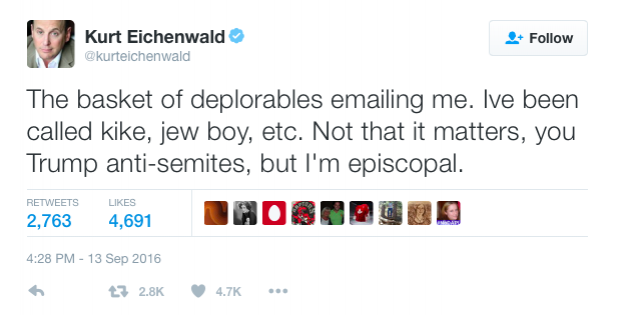 Nearly a week ago, Eichenwald mentioned the k-word, clearing falling apart on the word “calling.” Spelling errors are totally understandable. When you spend too much time on Twitter, your brain starts to eat itself.

Just three days ago, NYT deputy Washington editor Jonathan Weisman was called a “kike” in relation to a tweet he wrote that read, “Angry old white men being angry.” Someone named Funklestein responded with this: “White men built this country, kike.”

Weismann left Twitter in June after anti-Semitic trolls attacked him with grotesque Nazi-esque images. He even wrote a goodbye note of sorts — “Why I Quit Twitter — And Left Behind 35,000 Followers”

Not even four months later, he’s back.

There was some hint he’d return, despite saying that leaving “wasn’t much of a loss at all” and that abandoning the medium allowed him to miraculously read full stories in the New York Times and The Washington Post.

“I have been encouraged to return to Twitter, and told that I should continue to fight, that my exit was cowardly, that I let the haters win,” Weisman wrote in what is now his phony “Dear John” letter to Twitter. “And I might. I miss the quick rush of a scan through my time line.”

Ben Shapiro is an Orthodox Jew and editor-in-chief of The Daily Wire.

No matter that he’s a conservative, he’s anti-Donald Trump and not immune to the k-word.

When he recently wrote, “I think Hillary’s still not being truthful about her health. My proof: if she were being truthful, why did she bother murdering Harambe?” it was not met with praise. Instead, a phony account calling itself Donald Jr. wrote, “Stop using that dead meme you stupid kike.”

And sometimes the word comes out accidentally, like a sneeze. 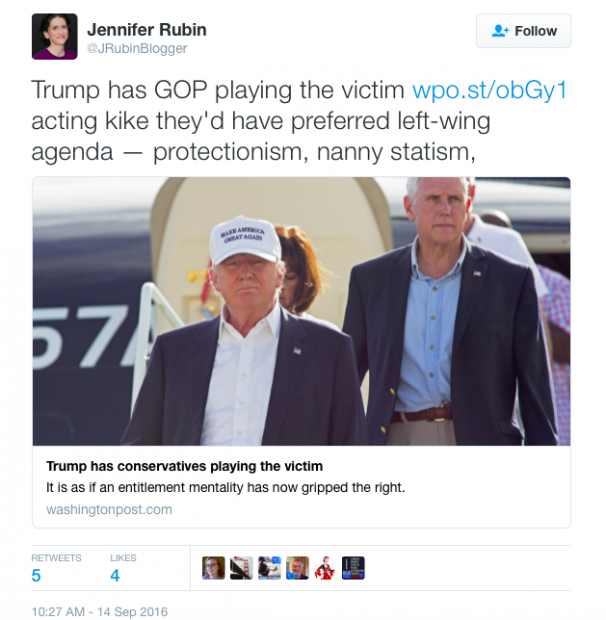 Politico chief political correspondent Glenn Thrush has also experienced the k-word. So much so that his wife, Diane Webber, was recently compelled to write an op-ed for the Forward with this headline: “When Your Husband Gets Called a ‘Filthy Kike’ On Twitter.”

Webber explained that the headline on one of Thrush’s stories drew the ire of white people.

I’m not sure how “What’s Wrong With America’s White People?” might do that (wink wink).

“A few of America’s white people are angry, bitter, racist anti-Semites who aren’t ashamed to spew hate all over social media,” wrote Webber, not really letting on that obviously the reaction of white people on Twitter might not be a hug.

Thrush’s editor, Susan Glasser, who is also Jewish, was dragged into the anti-Semitic commentary. Webber explained they were called “two kikes pretending to be white” by someone with the “charming” screen name of Adolf JoeBiden.

Webber is Catholic. But the couple raises their children as Reform Jews.

Her story moves to the Holocaust. And here’s an incredible whopper of a fact that I was not expecting: Glenn is named for grandmother, Gertrude Wiesenfeld Thrush. She lost her parents and siblings in the Holocaust, explained Webber.

Webber concluded by saying she’s appalled by this “racist name-calling” that has become all too common in her husband’s work life.

When the story inevitably made the rounds, some emerged to weigh in.

Naturally, there were with more insults.

“This ignores the fact Glenn Thrush is, in fact, a filthy kike,” wrote someone named @SpectreForever.